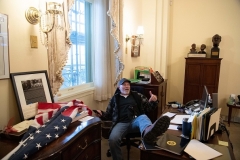 A Trump supporter takes over the office of Speaker of the House Nancy Pelosi in a violent protest at the Capitol on January 6, 2021. (Photo by SAUL LOEB/AFP via Getty Images)

"This is something we never want to see, no matter who it is," he told "Fox News" on Thursday. He said DHS will support the FBI in bringing the perpetrators to justice, "just as we do in every other city across the country."

Asked if he's "confident" that will happen -- that the culprits will be held accountable, Cuccinelli said, "I think many of them will, yes."

You know, there are limits on our ability to identify folks and -- but to the extent we can, I presume folks will be prosecuted. That ultimately comes to the prosecutors, but we at the Department of Homeland Security have urged prosecutors all across the country, state and federal, to take every single one of these cases, because until you do, until we have agreement left and right that violence is never allowable, ever allowable, then it's going to continue.

I mean, we've had six months of this kind of violence in other cities. And some in Washington, particularly in the summer, where some people in the media and some people in Congress were coddling of violent protestors -- well, all of a sudden, everybody's unified.

And I'm sorry it took this to get there, but the Department of Homeland Security has been against this kind of violence by whomever may perpetrate it all along. And that should be all of America's position. And I think now maybe it is.

Cuccinelli said he expects the violence and lack of security to be fully investigated, but he also said this is a "very unusual situation."

"Remember, Capitol Police report only to Congress. They aren't part of the Executive Branch. They don't have brother and sister agencies in their branch of the government. They're calling on the Washington Metro Police and the rest of us in the Executive Branch to help and support them.

"But that leaves the after-action in a very interesting posture. Congress is the one that takes a look at that. Now we can all weigh in, but that's who they report to. That's who they're accountable to."

The New York Times, quoting D.C. Metropolitan Police, said at least 52 people were arrested -- but most of the arrests were for violating the District's 6 p.m. curfew.

Cuccinelli said at the request of Capitol Police, "we're building fencing around the Capitol today and tomorrow. Expect that to be done. We'll have a secure inauguration. And that planning has been in the works for a long time.

"Secret Service (is) in charge of that. They always do a great job, and America can be very confident that you won't see a repeat of this kind of behavior."

The FBI is now seeking information from the public to help them identify "individuals who are actively instigating violence in Washington, D.C.”

According to the FBI announcement: “The FBI is accepting tips and digital media depicting rioting and violence in the U.S. Capitol Building and surrounding area in Washington, D.C., on January 6, 2021.

"f you have witnessed unlawful violent actions, we urge you to submit any information, photos, or videos that could be relevant at fbi.gov/USCapitol."