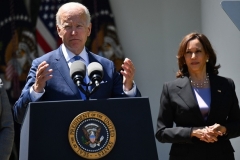 Vice President Kamala Harris joins President Joe Biden as he delivers remarks on lowering the cost of high speed internet at the White House on May 9, 2022. (Photo by NICHOLAS KAMM/AFP via Getty Images)

(CNSNews.com) - "High-speed Internet is not a luxury any longer, it’s a necessity," President Biden told a gathering at the White House on Monday, as he explained how the new Affordable Connectivity Program will help "nearly 40 percent" of American households to get $30 off their monthly Internet bill.

Many families will pay nothing, he said.

Biden repeated the anecdote about parents driving to McDonald's parking lots "just so they could get connected to the Internet so their kid could do their homework during the pandemic."

"It's just not right. It's not who we are," Biden said. "You know, the need for high-speed Internet is — is a little bit like what used to be probably what my grandfather talked about -- needing to have a telephone. It’s pretty consequential. And it’s only going to keep growing, this need."

Biden noted that the Bipartisan Infrastructure law included $65 billion to expand access to broadband Internet in every region of the country. That same bill also created the Affordable Connectivity Program.

"I refuse to call it the “ACP," Biden said. "I am so tired of acronyms in Washington. I can’t stand it," he said, prompting applause. "I cannot stand it. But I’m going to have to learn, aren’t I?"

"Here’s how it works," Biden said:

"If your household income is twice the federal poverty level or less — that’s about $55,000 per year for a family of four or $27,000 for an individual — or a member of your household is on Medicaid or Supplemental Security Income or a number of other programs, you’re eligible to — for affordably connect — the Affordable Connectivity Program.

"Nearly 40 percent of the households in America qualify. And if you qualify, you’re going to get a $30 credit per month toward your Internet bill, which me -- which most folks — will mean they get on for nothing. Look -- zero.

"Let me explain: In the past, 30 bucks a month meant you had to settle for a slow Internet service, unless you wanted to pay a heck of a lot more out of pocket.  But over the last few months, my administration has worked closely with Internet providers — this is a case where big business stepped up — urging them to cut their prices and raise their — their speeds.

"I’m trying to get others to do the same thing with inflation but that — these guys are the best."

The expansion of high-speech Internet service comes amid debate about liberal censorship of conservative voices on social media platforms – and about the Homeland Security Department’s murky “Disinformation Governance Board.”

"Not only is this great news for family budgets,” Biden said “it also means more jobs, more new small businesses, more connectivity.  So many people in so many communities that have been left behind.

“Already, more than 11.5 million have signed up and are on the program.  Thousands more are signing up each day.  And you can get started by taking advantage of this — in this new phase today.”

Biden said another 30 million people are eligible for the free high-speed Internet plan. “We want each of you — each and every one of you to take advantage of the chance and cut your Internet cost.”

On the topic of cost-cutting, Biden said, "The bottom line is this: my top priority is fighting inflation, and lowering prices for families and the things they need.

“Today's announcement is going to give millions of families a little more -- a little more breathing room to help them pay their bills. You know, we work with Democrats and Republicans, and business and nonprofits to make this happen. And we're going to keep working to fight inflation and lower cost of -- to all American families, for a lot of other things as well.”

Biden today (Tuesday) will give a speech on his plan to lower costs, amid raging inflation. He's speaking one day before the release of the April inflation report, which is expected to say that consumer prices rose 8.1 percent over the last 12 months, compared with the 8.5 percent year-to-year increase in March.

You can read about his anti-inflation plan here:

It includes releasing 1 million barrels of oil per day from the Strategic Petroleum Reserve for the next 6 months; allowing E15 gasoline (which uses homegrown biofuels) to be sold this summer; and calling on Congress to make companies pay fees on idled wells and non-producing acres on Federal lands – so that companies that continue to sit on excess capacity will have to choose whether to start producing or pay a fee.

And it calls for the “strongest ever fuel economy standards” for cars and trucks…while increasing options for families to make the switch to electric cars via historic investment in charging infrastructure and collaboration with autoworkers and automakers to set America on course to ensure one of every two cars sold in 2030 burns no fossil fuels.”