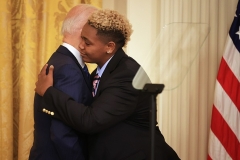 (CNSNews.com) - "Pride is back at the White House," President Joe Biden said at an LGBTQ event on Friday. "I am proud to lead the most pro-LGBTQ equality administration in U.S. history."

Biden urged passage of the "Equality Act" -- the antidote, he said, to "the disturbing proliferation of anti-LGBTQ bills we're seeing in state legislatures." And he hailed young transgenders as "some of the bravest people in the world."

These are some of the ugliest, most un-American laws I’ve seen, and I’ve been here awhile.  Many of them target transgender children, seeking to prevent them from receiving the appropriate medical care; for using the bathroom at high schools while they’re — the one where they’ll be most safe; even preventing them from joining sports teams with their classmates.

Let’s be clear: This is nothing more than bullying disguised as legislation.

As I’ve said before, many times, transgender kids are some of the bravest people in the world.  I mean it sincerely.  You just saw it with Ashton, and you’ll see it with several other young people here.  It takes courage to be true to your authentic self and to face — in the face of the — these kinds of discrimination you know exist.  It takes a toll.

(Ashton Kota, a transgender activist who introduced Biden at the White House Pride event, said he told his mother on his 12th birthday that he was transitioning to male, and he received the love and support of his family to do so. Mota is now 16 years old.)

“We know more than half of transgender youth seriously considered suicide just in the past year,” Biden said. “These young people aren’t hurting anyone, but these laws are hurting them.  And they’ve got to stop.”

Biden then mentioned his deceased son Beau, who, as the Delaware Attorney General, called for legislation "to protect trans people."

“I’m not sure I’m allowed to talk about this," Biden said, turning solemn:

But our son Beau, who was a decorated war veteran and attorney general of the United -- of the state of Delaware and should be standing here instead of me -- came home from war after a year in Iraq and, before that, six months in Kosovo.  And what he did -- he decided he was going to set up a foundation for LGBTQ youth, but primarily focusing on transgender youth.

And he took all the money left from the campaign — he was going to run for governor — and put it in and a lot more.  Because in his working with everyone from YMCAs to all the — all the — all the areas where young people can find some solace — his buddy Chris Coons and my buddy Senator Coons knows what he’s done.

The point is: A lot of transgender youth — those who commit suicide — based on the studies his foundation has done, do it because their mom doesn’t understand, because mom or dad says, “You can’t be here anymore” — are rejected.

So, folks, we got a lot of work to do.  A lot of it’s basically public education.

Let me close with this: When you go downstairs, you’ll see some of the Smithsonian exhibit.  You get a sense of the long, long journey — and how long it’s been, and how far we’ve come — have you come.  But how much further we have to go.

So, this afternoon, we celebrate.  But tomorrow, we go back to work.  Progress won’t come easily; it never has.  But we’re going to stand strong, stand together.  And I promise you, we will succeed.  I promise you.