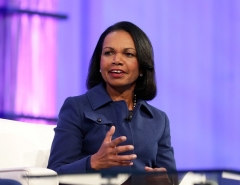 (CNSNews.com) - Former National Security Adviser and Secretary of State Condoleezza Rice said on Sunday that she's well-aware of "America's troubled past," because she's lived it. But she doesn't use the term "structural racism."

"I was born in Birmingham, Alabama," Rice told CBS's "Face the Nation" on Sunday. "I was eight before my family could go to a movie theater or to a restaurant. I didn't have a white classmate until we moved to Denver when I was 12.

“So, yes, I know America's troubled past. And that troubled past continues to have an impact going forward on how we see each other."

But Rice said she's stopped using the term "structural racism," which is now so pervasive:

When I hear the talk about structural racism, it really gives me pause. And it gives me pause because it doesn't tell me what to do. If we could talk about the impact of race on various aspects of our life -- I have family members who were victims of sickle-cell. That was an orphan disease for a long time and it affected mostly black people. When we think about medical outcomes that clearly are still disproportionate.

Can we finally agree that our K-12 education system is really serving poor kids and minority kids very badly? Can we agree that we actually have a choice system? Because if you are of means, you will move to the district where the schools are good. You will go -- and by the way, the houses will be expensive, so that's a choice. You can send your kids to private schools. So those are choices.

So who really doesn't have choice? Poor kids, and many of them are minority kids. So there are these impacts of race that I think are worth examining.

And I want us, as a country, to do it together because I don't want this to be black against white, my weaponization of my identity against yours.

"Well, I just -- John, I've -- I've ceased to -- to use it, because I don't know what it means anymore. And I think it's become a barrier to -- do I think that there are impacts of race that are clear in American life? Absolutely.

"But, you know, the other problem with it is, it sounds so big and impenetrable, as if we have to jettison the system somehow. And with all of its problems, having been all over the world, and having seen how people deal with difference, I will tell you that America deals with difference better than any country I've ever visited."