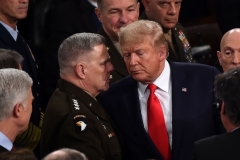 Chairman of the Joint Chiefs of Staff Gen. Mark Milley speaks to President Donald Trump following the February 2020 State of the Union address at the U.S. Capitol. (Photo by OLIVIER DOULIERY/AFP via Getty Images)

(CNSNews.com) - "I believe that Milley would do that," Rep. John Garamendi (D-Calif.) told CNN on Wednesday, when he was asked about the new book "Peril," that says Joint Chiefs Chairman General Mark Milley was so concerned about President Donald Trump's state of mind following the 2020 election that Milley felt it necessary to remind top military commanders that he must be involved in any decision to launch nuclear weapons.

“Peril,” by the Washington Post reporters Bob Woodward and Robert Costa, says Milley assured House Speaker Nancy Pelosi in the final weeks of the Trump presidency that he would "prevent" Trump from doing anything "illegal or crazy," including a nuclear strike in a foreign country.

The book also says General Milley used a "secret backchannel" to assure Chinese leaders that the United States was not planning to attack China.

On Tuesday, CNN's Alisyn Camerota asked Garamendi, "does it surprise you to hear that General Milley -- I mean, I'm talking about what General Milley did. You think that that's legitimate, that he would call a secret meeting and say don't listen to the commander in chief, basically?"

"I believe that Milley would do that," Garamendi responded. "Now, did he do it? Well, that remains to be seen, but I -- what I know of that general and his role as chief of staff is that he would call a meeting, given the concerns of an unhinged president at that period of time."

According to The New York Times, which has an advance copy of “Peril”:

The chairman of the Joint Chiefs of Staff twice called his Chinese counterpart in the final months of the Trump administration to reassure him that Donald J. Trump had no plans to attack China in an effort to remain in power and that the United States was not collapsing, according to “Peril,” by the Washington Post reporters Bob Woodward and Robert Costa.

“Things may look unsteady,” the chairman, Gen. Mark A. Milley, told Gen. Li Zuocheng of China on Jan. 8, two days after Mr. Trump’s supporters stormed the Capitol to try to stop the certification of his election loss and in the second of two such calls. “But that’s the nature of democracy, General Li. We are 100 percent steady. Everything’s fine. But democracy can be sloppy sometimes.”

Yet despite his assurances, General Milley was so concerned about Mr. Trump that later that day he convened a meeting with top commanders to remind them that the procedures for launching a nuclear weapon called for his involvement in such a decision.

"Then," the book says, Milley "went around the room and asked each officer to confirm that they understood what he was saying."

"It sounds like, from some of the rumors, if they are true, that he (Milley) may have overstepped his bounds. And if so, there ought to be consequences. But we don't know that any of this is true. Again, I suspect it will be all based on anonymous sources, as his books typically are. And we have to see, see what it says.

“But, no, I wasn't concerned. And I would hope that the reports that we are hearing are not accurate,” Portman said.

Portman noted that "only the president has the power...to make a decision about whether to go to war or not."

Asked if he had any concerns about Donald Trump becoming unhinged after the election, Portman said, "No, because he was surrounded by a lot of people who were, like the chairman of the Joint Chiefs, respected individuals. And the president did not do the things that you suggested that he would -- people were concerned about. So, no, I was not concerned."