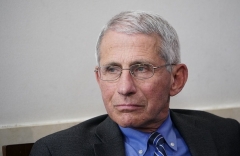 (CNSNews.com) - The number of coronavirus cases is rising, while the number of deaths has steadily declined, but don't take comfort in the lower mortality rate, Dr. Anthony Fauci told an online Q&A hosted by Sen. Doug Jones (D-Ala.) on Tuesday.

"It's a false narrative to take comfort in a lower rate of death," Fauci said. "There's so many other things that are very dangerous and bad about this virus. Don't get yourself into false complacency."

A reporter asked Fauci if the declining mortality rate is a function of better treatment options, a younger group of patients, or a mutating virus.

"The top two but not necessarily the third one," Fauci responded.

He said it's true that we're seeing more younger patients, who generally do better than older patients.

"Number two, we definitely are better now at treating individuals, because we have a couple of therapies that work well in people with advanced disease,” Fauci said.

“The idea that the virus is mutating, and so less damaging to people, has not yet been proven at all, so I don't think you can rely on the third one, but the first two options that you mentioned are entirely correct."

Fauci heads the National Institute of Allergy and Infectious Diseases, and he is a member of the White House Coronavirus Task Force.

President Donald Trump in recent days has tweeted that the death rate from coronavirus "is down tenfold" from its peak in mid-April, and based on actual death certificates collected by the federal Centers for Disease Control and Prevention, that is true.

The CDC reports 46,329 new COVID cases in the U.S. in its July 7 update. It reports 322 new deaths from the day before, for a total of 130,133 nationwide. CDC says the information on its daily tracker includes deaths reported daily by state, local and territorial health departments.

The CDC also provides a "provisional" COVID-19 death count, which is based on death certificates submitted over time to CDC's National Center for Health Statistics.

"These data represent the most accurate death counts," CDC says. "However, because it can take several weeks for death certificates to be submitted and processed, there is on average a delay of 1–2 weeks before they are reported. Therefore, the provisional death counts may not include all deaths that occurred during a given time period, especially for more recent periods."

The Johns Hopkins Coronavirus Resource Center also posts case numbers and death numbers based on a variety of sources, and its numbers are higher than CDC's.

For example, today, Johns Hopkins put the number of new coronavirus cases at 60,000 and the total number of deaths at 131,480. Those higher numbers are the ones reported by liberal cable outlets, which have spent days hyping the extent and severity of the pandemic.