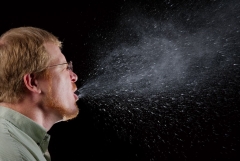 (CNSNews.com) - Keep your face mask handy. And forget about going to work or school if you're coughing and sneezing.

"I think you're going to see a veneer of safety superimposed upon normal life" from now on, former FDA Commissioner Dr. Scott Gottlieb told CBS's "Face the Nation" on Sunday.

COVID-19 and its variants are "likely to become an endemic virus," just as the flu and the common cold are, Gottlieb said:

And I think we're going to need to think differently about respiratory pathogens generally in the wintertime and be more vigilant about the spread of diseases, like flu and like coronavirus.

Flu is fearsome enough. We were far too complacent about it. And given the fact that we're now going to have the equivalent of a second circulating flu, I don't think we can be complacent about the risk of respiratory pathogens in the workplace and schools anymore.

So people are going to need to be more vigilant. We're going to have to do some things differently. That doesn't mean our lives change. But this is going to be a new normal.

I think the use of masks is going to become more normalized. I think people are going to use them on a voluntary basis...I think going to work with the sniffles is going to be frowned upon. I think businesses are going to have access to routine testing. I think there might be symptom checks within certain settings, if you have a congregate setting where a lot of people are getting together they might check symptoms. Fever guns might become more routine, even though they're not that helpful.

I think you're going to see a veneer of safety superimposed upon normal life. That doesn't mean that there's going to be mask mandates re-imposed. I'm not sure that's necessarily what we should be doing right now, given the substantially reduced overall death and disease we're seeing from coronavirus, which is likely to continue as long as this virus doesn't mutate in an untoward way.

But I do think we're going to need to be more vigilant about the spread of respiratory pathogens. I mean, think back, it was always looked upon as being something that was somewhat brave if you toughed out a cold. That's going to be really frowned upon now. You don't want to be in a social setting where you don't feel well. You're going to be asked to stay home.

So things are going to be different. I think we're going to deal differently with the risk of respiratory diseases in the wintertime.

Gottlieb said some workplaces may start giving employees a "symptom check," where they're asked a series of questions"

"And if you're a child who shows up at school not feeling well, you'll be sent home as well, too," he continued:

So I think, societally, we're just going to have a different etiquette around the risk of respiratory pathogens. We can't afford the morbidity and the mortality from flu and coronavirus being twin viruses that circulate at very high levels. Again, we were too complacent about flu. We let it infect and kill far too many people. I think we're going to have to think differently.

That also means improving air quality in workplaces. We're going to be looking at things like airflow and filtration. In the same way we greened buildings, I think we're going to make buildings more healthy as well.