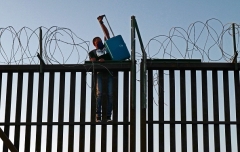 A foreigner attempts to illegally cross into the U.S. from Mexico on April 21, 2021 in San Luis, Arizona. (Photo by Nick Ut/Getty Images)

(CNSNews.com) - Concerns about immigration and race relations appear to be rising in this country.

A new Gallup Poll asked respondents, "What do you think is the most important problem facing this country today?"

The top problem remains coronavirus/disease, said 20 percent of respondents -- but that is the lowest percentage since the start of pandemic.

Following coronavirus, "the government" and "immigration" tied for second place, with 14 percent choosing each of those issues as the nation's top problem in April.

Last month, 20 percent chose government as the top problem, so that category is improving.

But the percentage naming immigration as the top problem increased six points from March to April (mostly among Republicans).

And concern about "race relations" showed a four-point gain to 12 percent in April (mostly among Democrats).

Rounding out the top problems identified by poll respondents:

The same poll found that a majority of Americans (65 percent) remain dissatisfied with the direction of the country.

Here's how Gallup explained it:

Americans' satisfaction with the direction of the country is now at 34%, little changed from last month's 32%, but is the highest since March 2020 when 42% were satisfied. Satisfaction has tripled since January when it hit its lowest point in a decade; still, roughly two-thirds of Americans, 65%, remain dissatisfied.

Gallup said its poll results are based on telephone interviews conducted April 1-21, 2021 with a random sample of 961 adults, ages 18+, living in all 50 U.S. states and the District of Columbia. The margin of sampling error is plus or minus four percentage points at the 95% confidence level.