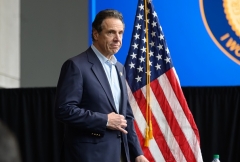 (CNSNews.com) - Fox News meteorologist Janice Dean said she resents the insensitivity of the Cuomo brothers, joking about nasal swab sizes at a time when so many people -- including two in Dean's own family -- have died of coronavirus.

Dean's mother-in-law and father-in-law both contracted the coronavirus in assisted living facilities in New York and died within two weeks of each other.

"This should be one of the biggest stories of this pandemic of 2020," Dean told her Fox News colleague Tucker Carlson Thursday night. "Twenty percent of our lost loved ones are from nursing homes. And it's because Governor Cuomo and several other governors, by the way, in different states, forced COVID-recovering patients into nursing homes.”

Dean said she's "certain" that her husband's father, the week before he died, was moved to another floor in his nursing/rehab facility. "And I believe that floor was used for recovering COVID patients. I can't prove that -- we can't get any confirmation on any of this.”

Dean said her husband didn't know until he received the death certificate that his father had died of COVID. "He got a call on a Saturday morning that his dad was not feeling well, and three hours later, he was dead. And his mom, two weeks later got COVID, was rushed to the hospital, died in the hospital and her number will not be counted as a nursing home or assisted living home (death) because of the governor's policy of saying that she died in the hospital, even though it was confirmed COVID.”

Carlson told Dean, "So, I mean, that's clearly an effort to reduce the total of reported deaths in nursing homes. A way to cover himself."

"Absolutely," Dean agreed. "And the fact that I am seeing last night him on another channel, making fun -- inappropriate jokes, insensitive jokes, cruel jokes. Make no mistake, I am really glad that Chris Cuomo has recovered from COVID because he apparently did have it. And I'm glad that their family is well, but my family is not well. And that's not something to joke about.”

At one of his news conferences in April, Cuomo said New York nursing homes must admit patients with COVID. “They don’t have a right to object. That is the rule and that is the regulation, and they have to comply with that,” Cuomo said.  He added that if a facility can't provide "adequate care," they should arrange to have the patient transferred elsewhere.

This week, at his May 20 news conference, Cuomo was asked why New York nursing homes were ordered to accept COVID patients. He blamed the Trump administration:

"Look, this is a political season, I get it. I have refrained from politics. I am not going to get into the political back-and-forth, but anybody who wants to ask why did the state do that with COVID patients in nursing homes, it is because the state followed President Trump's CDC guidance, so ask President Trump."

Cuomo said the CDC guidance says nursing facilities cannot discriminate against COVID patients, and he said the issue in New York was hospital beds and hospital capacity. He said some patients were sent to nursing facilities, because they didn't need to be in a hospital bed for two weeks, awaiting test results, when they were not urgently ill.

"Second fact, a nursing home cannot accept a patient who they are not qualified to handle," Cuomo said. "For a COVID patient, a nursing home has to be able to say, I can quarantine, I have the right staff, I have PPE, or else that nursing home should not take that patient.

Two weeks ago, Cuomo announced that New York hospitals would no longer be allowed to release patients to New York nursing homes unless the patient had tested negative for the virus. By that time, more than 5,000 nursing home/assisted living patients in New York had died of the virus.