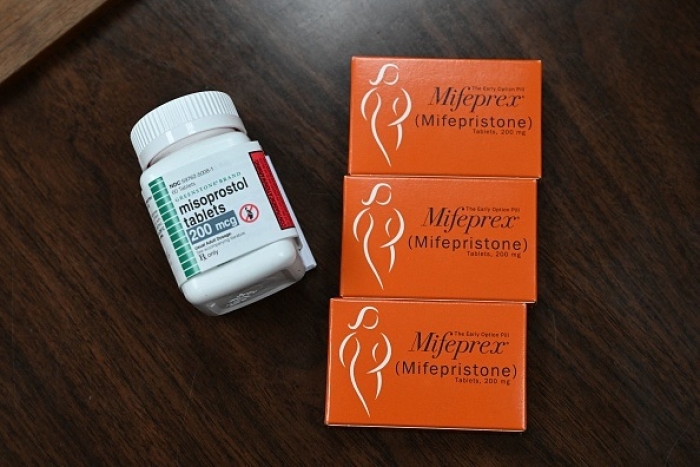 Mifepristone (Mifeprex) and Misoprostol, the two drugs used in a medication abortion, are seen at the Women's Reproductive Clinic, which provides legal medication abortion services, in Santa Teresa, New Mexico, on June 17, 2022. (Photo by ROBYN BECK/AFP via Getty Images)

(CNSNews.com) - At a news conference on Tuesday, Health and Human Services Secretary Xavier Becerra explained "why I think medication abortion is so critical."

He noted that abortion drugs have been approved by the FDA and are "safe for patients," including women who suffer miscarriages.

"Working to increase access to this drug is a national imperative and in the public interest. We will continue to support the FDA and its rigorous scientific review for these safe and effective drugs,” Becerra said:

"We will also work with the attorney general and the Department of Justice as they work to ensure that states may not ban medication abortion based on a disagreement with the FDA's expert judgment about the drug's safety and efficacy, and we will issue guidance to providers to ensure they receive accurate and robust information on medication abortion."

A reporter asked Becerra if he was saying that "because the FDA has approved these pills, that any doctor in any state may prescribe them?"

"In this country, in order for drugs to be made available to the American public, the FDA must act, consider that drug, and announce whether or not it has found it to be safe and effective. Mifepristone, those medications that may be classified as medication abortion that have received FDA's approval as safe and effective are therefore available for prescription.

"Medication abortion, those treatments that FDA has signed off on as safe and effective, are available to be prescribed. Under what conditions, stay tuned."

Waiting to see what states do

"What exactly that translates into depends on what a state tries to do. And what I can simply tell you is that we will continue to try to clarify for you, but mostly for the American public, what their rights are, what our authorities are.

"And so that way they know if indeed anyone, whether a state politician or a provider in your state, is violating your rights we'll try to be there and we'll try to make it clear what your rights are. But it's tough to answer some of these questions more precisely until we know exactly what the states are doing.

"If we see a state, for example, trying to deny a particular patient care in emer -- in an emergency room which could include abortion care services if it's appropriate to -- to preserve that woman's life or health, we will take action. We will do everything we can. But we have to make sure first Americans know what their rights are.

"And so that's why this is so important, because we know that there is misinformation out there about what the Supreme Court did. We want to make sure it's clear that Americans didn't lose every right they have. Americans still can assert their rights and we will do everything we can to protect them."