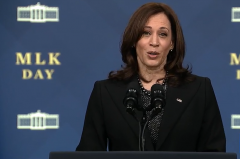 She said as many as 55 million Americans "could" find it "more difficult" to cast a ballot.

Harris did not say where she got the number "55 million," which apparently comes from a USA Today "analysis."

Today, our freedom to vote is under assault.  In Georgia and across our nation, anti-voter laws are being passed that could make it more difficult for as many as 55 million Americans to vote -- 55 million Americans.  That is one out of six people in our country.

Democrats, including President Biden, have peddled half-truths and outright lies about the Georgia law, all part of a push to force Senate passage of legislation that would allow the federal government to set one-size-fits-all rules for state-run elections.

Democrats are comparing the modern-day push to federalize elections to the lofty civil rights movement of the 1960s, using hyperbole to stoke division and to demonize Republicans as racists. In the 1960s, black voter suppression was a legitimate complaint, and it was remedied in part by the 1965 Voting Rights Act.

As Gov. Brian Kemp has noted, Georgia’s Election Integrity Act, S.B. 202, is an attempt to prevent vote fraud, not to prevent anyone from voting.

The Georgia law requires voter ID to cast absentee ballots, it secures drop boxes around the clock, and it expands weekend voting opportunities, all of which "are commonsense reforms that ensure Georgia elections are secure, accessible, and fair," Kemp said.

Even the Washington Post gave President Biden four Pinocchios for his claim that the Georgia law ends voting "at five o'clock when working people are just getting off work."

"The Facts," as the Washington Post laid them out:

On Election Day in Georgia, polling places are open from 7 a.m. to 7 p.m., and if you are in line by 7 p.m., you are allowed to cast your ballot. Nothing in the new law changes those rules.

However, the law did make some changes to early voting. But experts say the net effect of the new early-voting rules was to expand the opportunities to vote for most Georgians, not limit them.