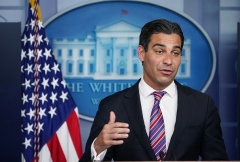 Miami Mayor Francis Suarez, a Republican, was just elected as head of the U.S. Conference of Mayors. Here he speaks to reporters at the White House about his COVID discussion with President Biden on February 12, 2021. (Photo by MANDEL NGAN/AFP via Getty Images)

(CNSNews.com) - The Republican mayor of Miami, just elected as head of the U.S. Conference of Mayors, says police officers have the hardest job in the country, and while some cities try to yank police funding, it's not happening in his city:

And I think we should not only invest in them in terms of the sheer number of them and their pay, but I think we should also invest in technology and giving them the tools as a force multiplier to -- you know, to do their job better. And that's something we've done in Miami.

We have a gun fire detection system. We have a NIBIN (National Integrated Ballistic Information Network) machine that is a ballistics machine. We have a Cellebrite machine (digital evidence collection). So we have a variety of different technologies that allow us to solve crime, that allow our officers to be more effective at doing their job. And we've seen the results. And I think it's something that can be replicated across America. Everybody deserves to be safe.

Host Bret Baier asked Suarez if he has his eye on higher office:

"Well, Bret, first of all, you know, being president of the U.S. Conference of Mayors is going to give me a tremendously unique opportunity to set an agenda for America's mayors. I do believe that America's cities, which have 85 percent of the population of America and constitute 91 percent of the GDP of this country need to be heading in the right direction. It's a generational opportunity for our country. And if we get it right, we are going to have generational prosperity.

"So once, you know, being president of the U.S. Conference of Mayors is over, which is a year-and-a-half from now, I will look at the landscape and decide if I want to serve at a higher level. And it will be hopefully, you know, an opportunity that will be enjoyable and prosperous and something that will be beneficial to the people of this country or this state or my city."

(Stay tuned, in other words.)