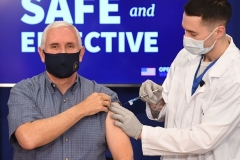 (CNSNews.com) - "I have to tell you, the president's speech yesterday was unlike anything I'd ever heard from an American president," former Vice President Mike Pence told Fox & Friends on Friday in his first television interview in months.

Pence, the former leader of President Trump's Coronavirus Task Force, criticized the tone of Biden's speech as well as Biden's statement that "this is not about freedom or personal choice."

I mean, to have the president of the United States say that he's been patient but his patience is wearing thin. That's not how the American people expect to be spoken to by our elected leaders.

I mean, the president should simply continue, as we've done, to lead by example, encourage people to take the vaccine as Karen and I did on national television back in December.

But to say that it's not about freedom -- it's exactly about freedom. America is about freedom and the ability to make the best decision for your family, for your business, and the approach this administration is taking now with this new surge of mandates and dictates from Washington, D.C.

And, also, with not respecting the leadership of the state level. That was central to the approach of the white house coronavirus task force. We got governors across the country, what they needed, when they needed it, and we respected them to make the decisions best for their state.

Pence accused Biden and Vice President Kamala Harris of undermining public confidence in the vaccine before they were elected:

"If you remember my vice presidential debate, I called out Kamala Harris," Pence said:

I said, you have got to stop playing politics with people's lives, 'cause she said she wouldn't take a vaccine that President Trump had created. And now we turn the page and we have gone...about 8 months, and they have given scant credit to President Trump and our administration for this vaccine.

I mean, it took -- it took President Biden about seven months even to acknowledge Operation Warp Speed. And so, look, you know, tomorrow we're going to remember a time of incredible unity in this country where we all came together. And from the very beginning of this pandemic, when President Trump tapped me to lead the task force, I said over and over again, we're all in this together. We're going to get through it together.

And the truth is, that the Biden administration with their tone, with their rhetoric, now with their mandates and with their unwillingness to give President Trump and our administration the credit for Operation Warp Speed has simply caused more division in the country.

I think they should be leading by example, give the American people the best information about what's best for their healthcare, and we'll get through this. But we will get through this in freedom. That's the priority in America.

In the October 7, 2020 vice presidential debate, moderator Susan Page asked then-Sen. Kamala Harris: "If the Trump administration approves a vaccine before or after the election, should Americans take it, and would you take it?"

Vice President Pence told Harris, "the reality is that we're going to have a vaccine in record time."

"And we’re right now producing tens of millions of doses," Pence said. "So the fact that you continue to undermine public confidence in a vaccine, if the vaccine emerges during the Trump administration, I think is unconscionable.

"And Senator, I just ask you, stop playing politics with people’s lives. The reality is that we will have a vaccine, we believe, before the end of this year. And it will have the capacity to save countless American lives. And your continuous undermining of confidence in a vaccine is just, it’s unacceptable."