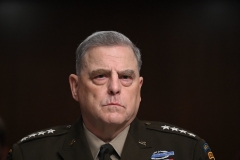 Chairman of the Joint Chiefs of Staff Gen. Mark Milley testifies before the Senate Armed Services Committee on September 28, 2021. (Photo by MANDEL NGAN/AFP via Getty Images)

(CNSNews.com) – “It is clear, it is obvious, the war in Afghanistan did not end on the terms we wanted, with the Taliban now in power in Kabul,” Joint Chiefs Chairman Gen. Mark Milley told the Senate Armed Services Committee on Tuesday.

Milley said he has “no illusions” about the Taliban; and he said it’s “a very real possibility” that terrorists will again try to attack the United States from Afghanistan.

Milley made the remarks in his opening statement before the Senate Armed Services Committee:

And we must remember that the Taliban was and remains a terrorist organization, and they still have not broken ties with Al Qaeda. I have no illusions who we are dealing with.

It remains to be seen whether or not the Taliban can consolidate power or if the country will further fracture into civil war. But we must continue to protect the United States of America and its people from terrorist attacks coming from Afghanistan.

A reconstituted Al Qaeda or ISIS with aspirations to attack the United States is a very real possibility. And those conditions, to include activity in ungoverned spaces, could present themselves in the next 12 to 36 months.

That mission will be much harder now, but not impossible, and we will continue to protect the American people.

Later in the hearing, Milley said "it's too early to tell" if the U.S. withdrawal raises the risk of terrorists striking from Afghanistan:

Sen. Joni Ernst (R-Iowa) asked Milley, "Are we at a greater or lesser risk of a terror attack from Afghanistan as a result of our withdrawal?"

"Too early to tell," Milley responded.

"Too early to tell," Ernst repeated.

"Yep," said Milley. "I think we've got about -- you know, to elaborate a little bit, we've probably got about six months here to really sort this out, to see which direction things are going to go. It's not much time, but that's my personal estimate. It could be out to 12 (months).

"And then we're going to have some indicators and warnings of what direction this is going to go. But that's where I'd put it."