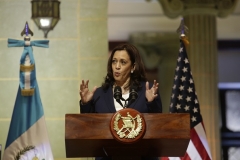 (CNSNews.com) - Vice President Kamala Harris is taking criticism, especially from Republicans, after NBC's Lester Holt asked her for the second time if she plans to visit the southwest border:

"Do you have any plans to visit the border?" Holt asked Harris in an interview that aired on Tuesday but was videotaped on Monday in Guatemala:

"You haven't been to the border," Holt told Harris.

"And I haven't been to Europe," Harris said. "I mean, (she laughs) I don't -- I don't understand the point that you're making. I'm not discounting the importance of the border."

Holt told Harris, "I mention it because I know Republicans have certainly come at you on this. But Democratic Congressman Cuellar has a border district, he's said to you and the president, come. You need to see this."

Earlier in the interview, Harris explained her "do not come" message, delivered in Guatemala, to would-be migrants. Leftists, including Rep. Alexandria Ocasio-Cortez (D-N.Y.) pounced on Harris for saying it.

(AOC tweeted: "First, seeking asylum at any US border is a 100% legal method of arrival. Second, the US spent decades contributing to regime change and destabilization in Latin America. We can’t help set someone’s house on fire and then blame them for fleeing.")

"I've been working on this issue for a very long time, and the kind of violence and danger that is associated with that trek, especially when we're talking about from Guatemala through Mexico to the United States, it's extremely dangerous.

“And the reason that I am in Guatemala is to address the reasons people leave home, flee, knowing that the people who are here for generations, or we know that the history of Guatemala for centuries, they want to stay. They don't want to leave. But they need opportunity. They need assistance. They need support. And we have the ability to give them that."

Holt noted that what Americans see is children being "lowered over fences" into the United States. "So the question has come up. You heard it here. You'll hear it again, I'm sure. Why not visit the border? Why not see what Americans are seeing in this crisis?" Holt asked Harris:

"Well, we are going to the border," Harris said. "We have to deal with what's happening at the border. There's no question about that. That's not a debatable point. But we have to understand that there's a reason people are arriving at our border and ask, what is that reason? And then identify the problem so we can fix it."

(As CNSNews.com reported, the same reasons for mass migration existed under Trump, yet his policies -- all reversed by President Joe Biden -- reduced the influx.)

Holt asked Harris, "What do you tell a Guatemalan family who heard you say 'Don't come,' but, you know, they're facing the end. There's poverty, there's disease, all these things happening at once. You tell them don't come?" he asked.

"We don't want -- listen, I don't think that Americans want people to be exposed to harm if they can avoid it. They're taking the trek from the place that they know, that they want to stay. So I'm here in Guatemala to say, what can we do to support people and to give them a sense of hope that help is on the way?"

Holt asked Harris what "improvement" looks like, given the flood of illegal immigrants flowing into the United States:

"And I would suggest to you that we have seen progress already. When we have 12 of the biggest corporations of America who have -- I convened them in my office, and they have agreed to help us work on this issue.

Success so far is the bringing together of community-based organizations, not only in the United States, but here in Guatemala. Today that was one of my meetings with civil society leaders, to let them know we see them, and we understand their concerns about corruption, and we also understand their role of leadership to help us in terms of how we prioritize our work in this region."

Harris said there is no "quick fix."

"We've seen progress, but the real work is going to take time to manifest itself. Will it be worth it? Yes. Will it take some time? Yes."