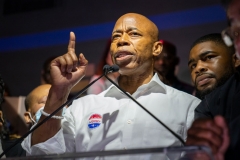 (CNSNews.com) - Eric Adams, the Democrat nominee for New York City mayor, said one of his priorities is to slow the flow of guns, particularly handguns, into the city. He even recommended "spot bag checks" at New York's Port Authority bus terminal to stop the gun trafficking.

"I believe, for the first time, we are going to see a coordinated effort between the president, the governor, the mayor to go after the flow of guns in our city, which is extremely important," Adams told CNN's "State of the Union" on Sunday.

We want to see the remake of an anti-gun unit that's going to do precision policing, focusing on gangs and guns. We're going to have a coordinated effort to ensure our gun suppression unit receive the resources they deserve.

And then we're going to be extremely comfortable going to our judges and stating, we can't have people who participate in gun violence and they're out the next day. That's unacceptable. We need to send a clear message that our streets are going to be safe.

"The numbers of those who are killed by handguns are astronomical," Adams said, particularly in poor and inner-city neighborhoods. "And if we don't start having real federal legislation, matched with states and cities, we're never going to get this crisis understand control."

Host Jake Tapper told Adams, "The United States isn't going to ban handguns. So what are you proposing be done about it?"

"And they should not have to, to ban handguns," Adams said:

But let's look at those particular gun dealers where there's a real correlation and connection with the guns that are used in our streets, those who are -- those states with lax gun laws, where you can walk into a gun shop with a license and walk out with the gun.

Let's look at all of the feeders of how guns are making their way into our cities, something simple as, here in the Port Authority, we should have spot bag checks.

People are able to get on the Greyhound bus and come into our cities with bags full of guns with a level of comfort. And so we need to zero in on that handgun, and you will see the decrease in many of these shootings.

But then we must have long-term plans of the feeders of violence in our country, because it's more than just dealing with the immediate shooting. Before that young person gets a gun, he was denied an educational opportunity somewhere in the city. That's the real crime that we are fighting.

On that same topic, Adams told ABC's "This Week" that his first (anticipated) term as mayor should be judged by how he restores public safety:

"Public safety. That's the prerequisite to prosperity," Adams told George Stephanopoulos. "We must have parks -- not like Washington Square, where people are injecting themselves with drugs while babies are trying to play.

"Our children should not be, like 10-year-old Justin, that's shot and killed. We should not lose 3-year-old children being shot in Times Square. Once we become safe as a city, then people can finally enjoy the growth that I'm going to bring in the city.

"We want to be a safe city, and we want to be ready to do business again. We're going to live up to our name. This is an Empire State. We want to build empires," Adams said.