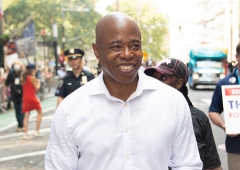 And by "muddying the waters," or conflating those two issues, "we're not going to get to the heart of it," he said.

Now let's go right to the crime problem. We must have an intervention plan and a prevention plan.

Prevention, those are the long-term things that many people talk about, such as dyslexia screening in our schools, 30 percent of our prison population is apparently dyslexic. And if we can stop the pipeline, or feed incline, of learning disabilities -- 55 percent of our inmates at Rikers Island have learning disabilities; mental health -- 48 percent have mental health illnesses. So if we would go upstream and prevent the feeder of crime, that would be a great way to stop the flow.

Now, let's deal with intervention. Right now, this is where the discomfort comes from, because many of my Democratic colleagues refuse to deal with the intervention. There are bad people doing bad things to good people, and I'm not going to sit back and continue to allow that to happen.

You can't have someone arrested with a gun on Monday and back doing another shooting because they're out of jail on Tuesday. That's unacceptable. And if we don't have real intervention...going after gang violence, going after those who are known shooters, and have precision policing in our city and country, we're going to have a real issue with violence that is going to be irreversible if we don't get this under control.

Lastly, this is very important. We've ignored this crisis because of the victims -- black, brown, poor. We've turned our backs on them. We know that these babies have been dying for years. Our crisis in America is not an assault weapons crisis. Our crisis is a handgun crisis.

Federal movement and state movement has only focused on assault weapons because of the mass shooters, but the mass shootings are taking place every day in the south side of Chicago; South Jamaica, Queens; Brownsville; Compton; Atlanta; but we're ignoring the handgun crisis because of the victim. The victim is black, brown, immigrant and poor.

Adams said if the shootings taking place on the South Side of Chicago were happening in affluent communities, "we would have a national emergency." He also blamed school systems across the country for not addressing learning disabilities and other problems that may lead people into crime.

"And it was one thing if it's only in Brooklyn. No! It's all the same across our entire country," Adams said. "We are...creating systemic poverty that is feeding crime across America, and we comfortable with it because of the demographics that's impacted. Ninety-five percent of the shooters in New York are black and brown, 95 percent of the victims are black and brown. No one cares. I care," Adams said.

Adams said New York City is "not going back to the days where you're going to stop, frisk, search and abuse every person based on their ethnicity and based on their demographics or based on the communities they're in. That's not what we're talking about, and we need to be clear on that. You can have precision policing without heavy-handed, abusive policing.

“And you must have an anti-crime -- a plainclothes unit that's gun-focused. Not the plain-clothes street crime unit that I fought against as a police officer, that I testified in federal court to get removed. That is not what we're talking about.

“But policing must have an element of uncertainty. Right now, if you just have blue and white cars out there, the bad guy is going to carry that gun with a level of comfort, and that's a big mistake that we're making here in New York and we're probably duplicating that across America,” Adams said.

Never mentioned in the conversation with Adams were the persistent problems of broken families and unchecked immigration, the latter adding tens of thousands of unskilled, uneducated people to the U.S. population as well as an untold number of gang members.

Also See:
NYC Mayoral Candidate Eric Adams: ‘I Was Beat and Abused by Police Officers’ Before I Joined the Force