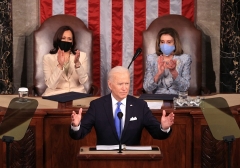 Vice President Kamala Harris and Speaker of the House Nancy Pelosi (D-Calif.) applaud President Joe Biden as he addresses a joint session of Congress on April 28, 2021. (Photo by CHIP SOMODEVILLA/POOL/AFP via Getty Images)

He noted that Election Day is the one day of the year when "normal" people have their say, while "crazy" media elites, pundits and politicians must shut up for a change and listen.

"It isn't even left or right anymore. It's crazy versus normal," Rubio said:

It's these people that run our school systems and so forth, and parents who, during the pandemic for the first time, got to see what their kids were learning because they were learning from home. And they're, like, you're learning what?! They’re you teaching what?! And when they spoke up, now they're domestic terrorists.

And look, I watched with great interest about all this (media) coverage about white supremacists. In Virginia last night, as you pointed out, a Jamaican immigrant, African-American woman, was elected lieutenant governor of the state.  A Cuban-American was elected attorney general of the Commonwealth of Virginia. None of that's being reported.

These people (leftists) are nuts. They spend all day on television and after they're off the air talking to everybody, and they all agree with each other because they all live in one or two cities. And they literally are completely out of touch with the fact that 97 percent of the American population lives completely different lives, has completely different views, and then when election day comes, they can't explain it, so they chalk it up to, they cheated or white supremacists or whatever. They make something up, because they can't comprehend it.

Last night was the beginning of that pushback, and I think it's going to continue. And you asked about the agenda here, it's the craziest thing I've ever seen. These people are governing like they have a mandate to radically remake the country. It's build back socialism.

And this administration, by the way, has been disastrous on everything, whether it's Afghanistan, now it's Russia threatening to invade Ukraine, Taiwan, supply chains. They can't name you a single thing that Joe Biden has managed correctly in his first nine or ten months as president. They can't name you one.

Rubio criticized Democrats for reversing the things Trump accomplished, "even the things that made sense," such as the border wall.

And he noted that President Biden is shutting down oil and gas production domestically, while asking other countries to produce more: "This is crazy. If I had described this to anybody two years ago, they would say that is never going to happen. The other guys aren't that crazy. Yes, they are," Rubio said.