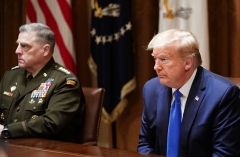 President Donald Trump and Chairman of the Joint Chiefs of Staff General Mark Milley meets with military leaders and national security team at the White House on May 9, 2020. (Photo by MANDEL NGAN/AFP via Getty Images)

"He has threatened the constitutional principle of civilian control of the military. He doesn't have the right, he doesn't have the authority to contact our opponents in Beijing and tell them that he will inform them about any action we might take before we take it.

"I mean, I can't believe I'm reading this," Hawley said. "I hope these reports are inaccurate. But he does need to resign. He needs to resign, and if he won't resign, he needs to be fired. I mean, he has broken the trust of the American people."

"Peril," by Washington Post reporters Bob Woodward and Robert Costa, says Milley was so concerned about President Trump's state of mind following the election that Milley twice called Chinese leaders through a backchannel to reassure them that the U.S. would not attack China.

The book says Milley also met with top U.S. military commanders to remind them that he, Milley, must be involved in any decision to launch nuclear weapons. Milley reportedly assured House Speaker Nancy Pelosi that he would "prevent" Trump from doing anything "illegal or crazy."

According to an excerpt printed in The New York Times, Milley told Pelosi:

I think what we're seeing here, these reports that we're seeing, Laura, I can't underscore enough how dangerous this is. How dangerous it is for a general, especially the Chairman of the Joint Chiefs, to take into his own hands, the conduct of American foreign policy, to undermine elected representatives, including, most importantly, the President of the United States, the elected president.

“Peril,” is scheduled for release next Tuesday. According to the blurb on Amazon.com:

Woodward and Costa interviewed more than 200 people at the center of the turmoil, resulting in more than 6,000 pages of transcripts—and a spellbinding and definitive portrait of a nation on the brink.

This classic study of Washington takes readers deep inside the Trump White House, the Biden White House, the 2020 campaign, and the Pentagon and Congress, with vivid, eyewitness accounts of what really happened.

Peril is supplemented throughout with never-before-seen material from secret orders, transcripts of confidential calls, diaries, emails, meeting notes and other personal and government records, making for an unparalleled history.