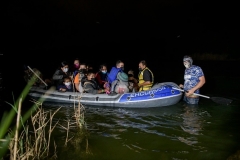 A human smuggler guides an inflatable boat carrying would-be asylum seekers from Central America across the Rio Grande River at the border city of Roma on March 29, 2021. (Photo by ED JONES/AFP via Getty Images)

She said the Biden administration will continue to move those thousands of unaccompanied teenagers/children to new homes in this country as quickly as possible.

And there is no thought of barring entry to new arrivals, or to sending recent arrivals back to their home countries:

First of all, we don't apologize for the fact that this is a president who has a more humane policy. The president said it himself the other day during his press conference. He's not going to apologize for taking care of children who come unaccompanied across the border.

But I do think we have to make sure that people understand that the border is not open. That the majority of people, especially single adults, will be expelled or deported. And that people need to understand that this is not the way to come to the United States. That we are working on legal pathways. On options that they can have to stay in their home countries. We are surging humanitarian assistance after two hurricanes last November.

Jacobson said the many of the older children "know family members in the United States. Sometimes it's parents, sometimes it's grandparents. And we have re-engineered our system to ensure that that matching, that connection to their family, takes place much more rapidly and that they can then move on from HHS facilities to family members.

"If they don't have family members in the U.S., they are matched with sponsors, foster families or other environments that are appropriate for children, equally rapidly. So that is what we're doing right now, is making sure that we get these children into a home setting as quickly as possible."

Jacobson said the Biden administration is competing with the "loud" smugglers to spread the message "that the border is not open."

She also said the surge in migration -- unprecedented in the case of minors -- is "seasonal," happening every year at the beginning of spring:

"Yes, it is a larger group than usual, but that they will also diminish at a certain point," she said.

"And the thing that we have to do most quickly is get humanitarian assistance, job training, education, feeding assistance, because there's food insecurity throughout these countries. We need to provide options.

"That's why we restarted the Central American Minors Program, that's why we're expanding it, that's why we're creating new legal pathways, so that this number of children and others, families and individuals, will go down because people will have other options. Options to stay home, and options to come here legally."