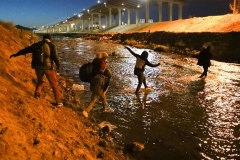 Haitians illegally cross the Rio Bravo in an attempt to get from Ciudad Juarez, Mexico to El Paso, Texas, on March 30, 2021. (Photo by HERIKA MARTINEZ/AFP via Getty Images)

"Well, that's exactly what both the Texas Department of Public Safety as well as the Texas National Guard are doing," Abbott said.

They are enforcing the law by going into these stash houses, by making arrests, by making the apprehensions, doing everything that the Biden administration is supposed to be doing.

But even more than that, because what happens is, these cartels know exactly where they're going, and they distract the Border Patrol so that they can try to sneak into the U.S. drugs or people from terrorist-sponsored nations.

And that's exactly why we need Texas law enforcement filling that gap so that we can detect and crack down on crimes like that that may be coming across the border.

Abbott said the Biden administration's decision to open the borders is boosting crime, which Texas law enforcement must address:

“Let me give you some numbers that we talked about today, knowing that it was just four weeks ago that I deployed the Texas Department of Public Safety,” Abbott said:

And in just four weeks, they've been able to arrest almost 600 criminals who were here illegally or engaged in illegal activity and apprehended more than 16,000 people here illegally and turned them over to the Border Patrol.

Let me give your audience just a couple of examples. The Texas Department of Public Safety, they investigated a stash house. And in the stash house, they found four illegal immigrants, plus a gang member who was wanted on two counts of rape of a child.

In addition to that, DPS, they pulled over a vehicle and in the vehicle, they found a smuggler with a car full of illegal immigrants, including a 14-year-old girl who the smuggler had sexually assaulted.

There was a story about a six-month-old baby that smugglers -- that were bringing people in these rafts across the river. They tossed that six-month-old baby into the river, and it took a Texas Department of Public Safety officer to go into that water and to save that child.

These are the types of reckless criminal behavior that Texas is having to step up and respond to.

Abbott says the chaos at the border will continue as long as the Biden administration fails to respond to the dangers.

In the meantime, U.S. Border Patrol is overtaxed, trying to process daily surges of unaccompanied children and trying to move the thousands who arrived previously into the custody of the Health and Human Services Department.

"We were flying over today, Sean, in the middle of the day," Abbott said.

Abbott said Texas is asking the federal government to reimburse "the cost that we are incurring because of this."