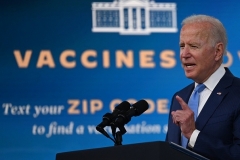 "You'll recall that it was just recently that he said he did not have the authority to impose the moratorium on evictions, and yet he did it. And the courts ruled against him," Abbott said:

He also said he didn't have the authority to and would not mandate the vaccines on people in the United States of America and he does not have that authority under the Constitution. As you point out, it is states and governors who have the authority.

And, Sean, I have issued an executive order already in existence that prohibits any government from imposing a vaccine mandate on my fellow Texans.

So we're going to have a constitutional showdown. I believe that governor's orders will supersede the president's orders because the president does not have the authority to impose this. But more practically, Sean, is the effect that President Biden is having on businesses.

President Biden's order, it will cause businesses maybe to shut down. I've seen a report that showed as many as 40 percent of workers may not show up to work if they're required to get a vaccine shot. That will cause employers not to be able to have the employees they need to run their businesses. So this is very dangerous for business.

In fact, the Texas Association of Business said this is a frightening precedent established by Joe Biden because if he's able to do this, he would be able to establish any type of regulatory regime over the way businesses operate. That is bad for business in America.

Abbott is one of the Republican governors Biden has criticized for banning mask and vaccine mandates in Texas. "We encourage people to get a vaccine, but we should not mandate it," Abbott said on Tuesday.

Biden expanded his COVID-related mandates last week, ordering COVID vaccinations for all executive branch federal employees and federal contractors. Biden also directed his Labor Department (OSHA) to draft an emergency rule requiring all businesses with 100 or more employees to ensure their workforces are fully vaccinated or show a negative test at least once a week.

Abbott noted that many Americans may have natural immunity after recovering from COVID, and he said they should not be required to get a vaccine.

Abbott also said his administration is opening Regeneron antibody therapeutic centers across the entire state of Texas: "It can help people quickly recover from COVID, and it is absolutely free. All you need is a doctor to recommend that you get it, and we make it so easy for people to get it. It is one way that we can keep people out of hospitals and help people more quickly recover from COVID.

"That needs to be taken into consideration by the Biden administration but also by all the governors who are running their states and making these decisions about whether or not people should be mandated to get a vaccine."

Abbott said he is fully vaccinated, but he got a breakthrough case of COVID: "I did take Regeneron, and I quickly recovered. I had some aches and pains that would be consistent with a very mild case of flu, but I tested positive for four days, and then was good to go after that.

"And so, I've seen the value of Regeneron and I encourage my fellow Texans and my fellow Americans to take advantage of this incredible treatment that we have that will help you to quickly get over COVID and get back to work."