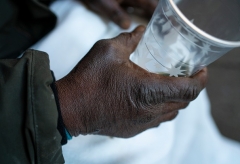 (CNSNews.com) - Texas Gov. Greg Abbott is reminding the people of Austin that this is the last day to vote early on a measure that would ban "public camping and ensure greater health and safety for all living in the Austin area."

In-person voting on Proposition B is set for May 1.

Austin Proposition B is intended to crack down on Austin's growing homeless population.

A "yes" vote would make it a criminal offense (Class C misdemeanor punishable by a fine) for anyone to sit, lie down, or camp in public areas, and it would prohibit panhandling at specific hours and locations.

In a Tuesday tweet, Gov. Abbott urged a "yes" vote.

Two years ago, the Austin City Council revoked local bans on sitting or sleeping in most public areas, and since then, the homeless population has grown.

In January, Abbott warned that "If Austin doesn't reinstate the ban on homeless camping, the state will do it for them." He said, "no one has a right to urinate & defecate wherever they want. Homelessness promoted by Austin has also endangered public safety."

According to Austin's official website, the most recent Point in Time Count estimated that 2,506 people experience homelessness on any given night in the city. But the city noted that "national consultants put our homeless population at about 10,000 out of the million Travis County residents, so roughly 1 percent."

Why so many homeless? "Systemic factors like generational poverty, affordability, racism, education, healthcare, and the criminal justice system cause instability that can lead to homelessness and complicate the process of becoming and staying housed,” the city says.

The city says, "Access to affordable housing is critical to ending homelessness."