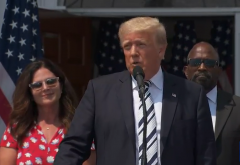 (CNSNews.com) - President Donald Trump on Wednesday announced that he is filing a "major class action lawsuit against the Big Tech giants," including Facebook, Google, Twitter and their CEOs.

He called it a "very beautiful" development for free speech:

We're asking the U.S. District Court for the Southern District of Florida to order an immediate halt to social media companies' illegal, shameful censorship of the American people. That's exactly what they’re doing.

We're demanding an end to the shadow banning; a stop to the silencing; and a stop to the blacklisting, banishing and canceling that you know so well.

Our case will prove this censorship is unlawful, it's unconstitutional, and it's completely unAmerican. You know that very, very well.

"We're going to hold big Tech very accountable," he said, adding that he anticipates additional lawsuits to follow his own.

Trump said he's confident of achieving a "historic victory" for freedom of speech.

The former president noted that freedom of speech does not come from government: It's "given to us by God, and no one should have the power to take that right away."

The freedom enshrined in the first amendment is "under incredible threat and attack by a lot of different sides," Trump said.

Trump said social media has given extraordinary power to a group of Big Tech giants that are working with government, the mainstream media and a large segment of a political party to silence and suppress the views of the American people.

He said although the tech companies are private entities, their use of Section 230 as a liability shield has made them tools of government, partisans and government actors.

Last month, Facebook reaffirmed its decision to suspend Trump's accounts for two years, effective from the date of the initial suspension on January 7, the day after the attack on the Capitol.

"At the end of this period, we will look to experts to assess whether the risk to public safety has receded," Facebook said. "We will evaluate external factors, including instances of violence, restrictions on peaceful assembly and other markers of civil unrest. If we determine that there is still a serious risk to public safety, we will extend the restriction for a set period of time and continue to re-evaluate until that risk has receded."