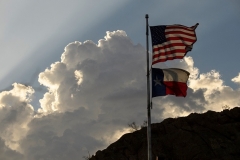 (CNSNews.com) - The Texas Legislature is back in special session on this Thursday, to take up an election integrity bill, as well as legislation dealing with bail reform, social media censorship, transgender sports, restrictions on abortion-inducing drugs and critical race theory.

Republican Gov. Greg Abbott called the special session in May, when Democrats in the Texas House of Representatives walked out of the chamber, to prevent passage of what they call a voter "suppression" bill.

There are no voter restrictions. We're not rolling back anything. We simply are making sure we have secure ballots, that the mail-in ballots are secure. We're actually adding hours to voting time, not taking any hours away.

And some of the issues they talked about -- about 24-hour voting and drive-in voting -- are not in the election code, they've never been in election code. It was one rogue county, Harris County, where Houston is based, that went on their own way and set those rules in place.

We're not rolling anything back. And Bill, here's something. I always like to bring you something that your viewers don't know. Here's the truth about Texas. I was one of the authors of the voter ID bill in 2011. Since 2011, Bill, we have increased voter turnout of registered voters from 58 to 68 percent.

We have increased voting more than any state in the country, more than 40 percent. We've increased voting for governor, lt. governor, attorney general by 76 percent. This is all in the last ten years. So this is nonsense. When any Democrat, when anyone from the left says that we are making it difficult to vote in Texas, it's the easiest place you can vote.

It shows by the numbers. I mean, Just in the presidential election alone, Bill, in 2016, Hillary and trump, 8.9 million voters. This last year, with Biden and Trump, it was over 11 million voters. The same thing in my race. We went from 5 million to eight-and-a-half million voters.

And every time we put in photo ID or ended straight-ticket voting like most states don't have it, either -- every time we've done that, the Democrats cry foul:  'Oh, it's restrictions, they don't want people to vote.' Again, we've set all-time records in voting turnout in Texas since some of these other bills we've passed. And the same thing will happen when we pass Senate Bill 1 this time, the election voter security bill.

Patrick noted that some of the other bills on the governor's agenda have already passed the Texas Senate in the regular session, but they didn't make it through the House.

And if Democrats stage another walkout?

"That will be on them," Patrick said.

"If they leave, they're stuck. Because I think that when you look at the 2022 election ,november a year from now, independent voters -- look, Democrats may stick with some of them, but even Democrat voters  will be upset they're not doing their constitutional duty. But Independents will say, this is anarchy.

“It's one thing having anarchy in the streets, but when you run for office and you win, you have a constitutional duty to show up. And they should show up. And if they walk out again, then that will be on them. I believe that they will stay, but we'll see what their actions are, because the price they would pay would be too huge with the voters, I believe,” Patrick said.

Here is the legislative agenda released by Gov. Greg Abbott for the special session of the state legislature:

-- Legislation reforming the bail system in Texas to protect the public from accused criminals who may be released on bail.

-- Legislation strengthening the integrity of elections in Texas.

-- Legislation safeguarding the freedom of speech by protecting social-media users from being censored by social-media companies based on the user's expressed viewpoints, including by providing a legal remedy for those wrongfully excluded from a platform.

-- Legislation providing appropriations to the Legislature and legislative agencies in Article X of the General Appropriations Act.

-- Legislation similar to Senate Bill 1109 from the 87th Legislature, Regular Session, requiring schools to provide appropriate education to middle- and high-school students about dating violence, domestic violence, and child abuse, but that recognizes the right of parents to opt their children out of the instruction.

-- Legislation identical to Senate Bill 29 as passed by the Texas Senate in the 87th Legislature, Regular Session, disallowing a student from competing in University Interscholastic League athletic competitions designated for the sex opposite to the student's sex at birth.

-- Legislation similar to Senate Bill 394 from the 87th Legislature, Regular Session, which prohibits people from providing abortion-inducing drugs by mail or delivery service, strengthens the laws applicable to the reporting of abortions and abortion complications, and ensures that no abortion-inducing drugs are provided unless there is voluntary and informed consent.

-- Legislation similar to House Bill 3507 from the 87th Legislature, Regular Session, relating to a "thirteenth check" or one-time supplemental payment of benefits under the Teacher Retirement System of Texas.

-- Legislation providing appropriations from additional available general revenue for the following purposes: property-tax relief; enhanced protection for the safety of children in Texas' foster-care system by attracting and retaining private providers for the system; and to better safeguard the state from potential cybersecurity threats.