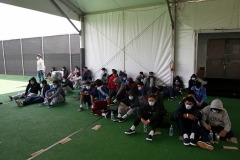 Minors who tested positive for COVID-19 are seen at the Donna holding facility, the main detention center for unaccompanied children in the Rio Grande Valley run by the US Customs and Border Protection, in Donna, Texas on March 30, 2021. (Photo by DARIO LOPEZ-MILLS/POOL/AFP via Getty Images)

(CNSNews.com) - A White House spokeswoman told reporters on Friday that illegal aliens -- "from the moment they are taken into custody...are required to keep masks on at all times, including when they are transferred or in the process of being released."

She also indicated that people apprehended after crossing into the United States are tested if they show "signs of illness in CBP custody."

Deputy Press Secretary Karine Jean-Pierre was prepared for the question, because she was reading the answer from her briefing book.

Here is a transcript of the question posed by Fox News's Peter Doocy and the response by Jean-Pierre:

And last one, just because you talked about this administration having a priority of protecting the American people, can you help us understand why is it that the federal government is asking vaccinated Americans to wear masks to stop the spread of COVID-19? But at the same time, federal agents are also releasing COVID-19 positive border-crossers into small towns in Texas--how does that stop the spread?"

Okay so let's--I just want to be very clear here, I do want to answer your question, Peter. First, just to step back and do this 30,000-foot view--there has been no change in Title 42.

Families and single adults are expelled if possible when apprehended at the southern border. The majority of apprehensions that we saw at the border in June were expelled. Those who can't be expelled or are--or are awaiting processing are often placed in alternative--alternatives to detention programs while their cases are being reviewed.

CBP provides migrant(s) with PPE from the moment--from the moment they are taken into custody and migrants are required to keep masks on at all times, including when they are transferred or in the process of being released.

If anyone exhibits signs of illness in CBP custody, they are referred to local health systems for appropriate testing, diagnosis, isolation and treatment. CBP takes it--its responsibility to prevent the spread of communicable diseases very, very seriously.

We value our partners in local communities whose work is critical to moving individuals safely out of custody and through the appropriate immigration pathway and assist in mitigating COVID-19 and isolating, quarantining when needed. So that--that's what I have for you, Peter.

In May, the American Civil Liberties Union wrote to Homeland Security Secretary Alejandro Mayorkas, complaining that "Throughout the COVID-19 pandemic, Immigration and Customs Enforcement (ICE) detention centers have been among the most dangerous places in the United States. COVID-19 infection rates in ICE detention are 20 times higher that of the general population, and five times greater than in prisons.

"COVID-19 outbreaks in ICE detention have also led to the rapid spread of the virus in surrounding communities, so that ICE has been labeled by many a “superspreader agency. As of May 26, 2021, over 15,000 immigration detainees have been infected with COVID-19, and at least nine have died after contracting COVID-19 in ICE custody ICE’s failure to ensure a coordinated strategy for vaccination continues to endanger people in detention nationwide," the ACLU wrote.

At a March 17 hearing of the House Homeland Security Committee, Mayorkas said illegal immigrants are being tested for COVID before they are released.

"So we have four different ways in which we test individuals who come into the country whom we do not expel," Mayorkas said.

We are working now with funds appropriated by Congress to fund directly community based organizations and local facilities to conduct the testing and quarantines, and when those three options are not available, we are now retaining a vendor to test individuals who are in CBP custody.

And if, in fact, they test positive, we transport them to ICE facilities for quarantine before release. That is our four point architecture.

But on April 28, The New York Times reported that U.S. Border Patrol "says it has  insufficient time and space to conduct coronavirus testing at crowded processing stations."

According to that report, "the failure of U.S. authorities to test adult migrants for the coronavirus in jam-packed border processing centers is creating a potential for new transmissions, public health officials and shelter operators warn, even among migrants who may have arrived healthy at America’s door."

The reported noted that more than 170,000 migrants crossed the border in March, "but the Border Patrol is conducting no testing for the coronavirus during the several days that the newly arrived migrants are in U.S. custody, except in cases where migrants show obvious symptoms."

"U.S. officials say the challenges to testing all the new arrivals when they are first apprehended are insurmountable."

This week, Texas Gov. Greg Abbott signed an executive order barring the "ground transportation" -- except by federal, state or local law enforcement -- of people who have been detained by CBP for crossing the border illegally or who would have been subject to expulsion under the Title 42 order.

The order noted in part that "busloads of migrants, an unknown number of whom are infected with COVID-l9, are being transported to communities across the State of Texas, exposing Texans to the spread of COVID- 19, as has already been reported in cities like La Joya, among others..."

Attorney General Merrick Garland wrote a letter to Abbott, telling him to rescind the order, which "violates federal law in numerous respects."