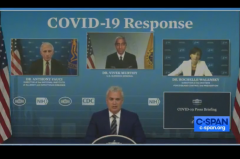 (CNSNews.com) - President Biden's COVID-19 response team says the United States has not yet met its "aspirational" goal of having 70 percent of all adults receive at least one vaccine dose by July 4th.

And where did that 70 percent target come from?

Dr. Anthony Fauci told a news conference on Tuesday that 70 percent "seemed like a reasonable number to do. It was empiric. I mean, there was no mathematical certainty to it. But I think most--not, I think. I know that most of us agreed that that was quite a reasonable number."

White House COVID-19 Response Coordinator Jeff Zients told the same news conference, "We have already met the president's 70 percent goal for all U.S. adults 30 and older. That's right. For those ages 30 and above, 70 percent have at least one shot."

Where the country has more work to do is particularly with 18 to 26-year-olds. The reality is many younger Americans have felt like COVID-19 is not something that impacts them and they've been less eager to get the shot. However, with the Delta variant now spreading across the country and infecting younger people worldwide, it's more important than ever that they get vaccinated.

We are working with state and local leaders to reach them. We think it'll take a few extra weeks to get to 70 percent of all adults with at least one shot with the 18 to 26-year-olds factored in.

So to recap, with respect to the first goal of getting at least one shot to 70 percent of American adults, already we're at almost 90 percent for 65 and older, over 75 percent for 40 and older, and 70 percent for 30 and older. We will meet the 70 percent goal for ages 27 and older by the end of July 4th weekend, with a few extra weeks needed for the 18 to 26-year-olds to get vaccinated.

Those holding the news conference made the point that "individuals who are still unvaccinated are still at risk," as Zients said.

And Fauci warned that "the Delta variant is currently the greatest threat in the U.S. to our attempt to eliminate COVID-19." He noted that U.S. vaccines are effective against the Delta (Indian) variant: "Conclusion -- we have the tools, let's use them and crush the outbreak."

Dr. Rochelle Walensky, director of the Centers for Disease Control and Prevention, gave an update on the current COVID situation:

"And the seven-day average of daily deaths have also declined to 273 per day. These numbers demonstrate the extraordinary progress we have made against a formidable foe. Thanks to our vaccination programs, we are seeing a dramatic decline in deaths, hospitalization, and cases, and we will continue to vaccinate people across the summer months."