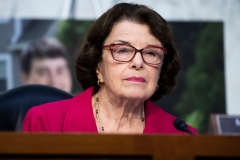 (CNS News) – When asked when the federal budget will be balanced, given that President Joe Biden’s budget proposal would rack up $14.5 trillion in cumulative deficits over the next 10 years, Sen. Diane Feinstein (D-Calif.) said the “budget will be fully paid for, obviously,” and “the taxpayers will end up paying for it.”

She stressed, however, that a “balanced budget” is a term that does not “work well with the federal budget because it’s a piece of the big picture.”

At the U.S. Capitol on Thursday, CNS News asked Senator Feinstein, “President Biden has presented Congress with a budget that’s supposed to run $14.5 trillion in deficits over the next decade. Will Congress balance the budget?”

Feinstein replied, “Well, it all depends by what you mean by balancing the budget. It’s still -- the budget will be fully paid for, obviously. That term doesn’t really work well with the federal budget because it’s a piece of the big picture.”

When asked what year she thought Congress would balance the budget, Sen. Feinstein said, “Well, balancing the budget has to do with raising monies. The budget is balanced in it’s going to be paid for, the taxpayers will end up paying for it, if, the end result. It’s not the way.”

She continued, “It’s the same thing I did in San Francisco when I was mayor. I submitted budgets and the budget itself becomes part of the city and the city responsibility. So yes, it’s paid for.”

“This is the same thing, a budget will become part of the civic, national responsibility,” said the senator.  “And so, if taxes, taxes may have to be raised. I don’t know that I’m not saying that now. But those are the revenue sources out there to balance it.”

“If you are asking me if the budget is the same amount as last year, it isn’t,” she added. “Because budgets go up every year. So, when you use that terminology -- I mean, I was mayor of San Francisco for two full terms and on the board of Supervisors for three terms. And we did budgets for the city and county of San Francisco, which were only funded by the city and county of San Francisco, based on monies available. The same thing happens here [in Washington] but it’s much bigger, and different in a sense.”

“That’s why, because I know about budgets, it’s hard to answer the question yes or no,” she said. “So, maybe I’m not a good person to talk with.”

Under Biden's budget proposal, the federal government will continue to deficit spend (accumulate debt) for at least the next 10 years, with total borrowing hitting a combined $14.5 trillion in 2031.

The New York Times has reported, "President Biden would like the federal government to spend $6 trillion in the 2022 fiscal year, and for total spending to rise to $8.2 trillion by 2031. That would take the United States to its highest sustained levels of federal spending since World War II, while running deficits above $1.3 trillion through the next decade."  (Emphasis added.)