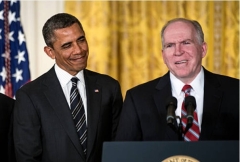 (CNSNews.com) - John O. Brennan, who was a foreign policy adviser to Barack Obama when he ran for president in 2008 and then was later named by Obama to be director of the Central Intelligence Agency, sent out a tweet on Friday stating that was “honored” to serve with LGBTQ+ people in the CIA.

“During my career, I was honored to serve with exceptionally talented, professional, & dedicated members of the LGBTQ+ community in the CIA, throughout the USG, & in the US Military,” Brennan tweeted.

“Pride Month should make us all proud,” said Brennan.

Brennan has said that in the 1976 presidential election, he voted for the Communist Party candidate Gus Hall and then admitted this fact during a polygraph test he took while joining the CIA. “Brennan told the polygraph operator that he had voted for Hall, but added that he was never a member of the Communist Party,” Politifact reported.