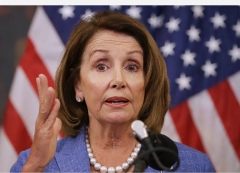 (CNSNews.com) - Rep. Alex Mooney (R.-W.V.) rose to object in the U.S. House of Representative today to a request from House Democratic Leader Steny Hoyer (D.-Md.) that the House move immediately by unanimous consent to pass a resolution calling on Vice President Mike Pence to invoke the 25th Amendment to remove President Donald Trump from office—with 9 days left in his term.

The resolution was sponsored by Rep. Jamie Haskin (D.-Md.). After Mooney objected, the House went into recess until Tuesday.

House Speaker Nancy Pelosi then issued a statement saying that the Republican move to block unanimous consent on the resolution puts them in “complicity” with Trump and “endangers America.”

“On Wednesday, the President incited a deadly insurrection against America that targeted the very heart of our Democracy,” Pelosi said. “The President represents an imminent threat to our Constitution, our Country and the American people, and he must be removed from office immediately.

“Today, in pro forma session, Leader Hoyer introduced a Unanimous Consent request to take up legislation by Congressman Jamie Raskin calling on the Vice President to mobilize the Cabinet to activate the 25th Amendment to remove the President,” said Pelosi.

“The House Republicans rejected this legislation to protect America, enabling the President’s unhinged, unstable and deranged acts of sedition to continue,” she said. “Their complicity endangers America, erodes our Democracy, and it must end.”

In a “Dear Colleague” letter sent to House Democrats on Sunday, Pelosi indicated that if the unanimous consent motion on Raskin’s resolution failed, the House would bring it up for a vote on Tuesday—and ask Pence to respond within 24 hours.

Pelosi indicated that after that, she would move to bring up articles of impeachment against Trump.

“If we do not receive Unanimous Consent, this legislation is planned to be brought up on the Floor the following day,” said Pelosi. “We are calling on the Vice President to respond within 24 hours.

“Next, we will proceed with bringing impeachment legislation to the Floor.

Mooney issued a statement, explaining why he object to the motion for unanimous consent on the resolution.

“Speaker Pelosi should not attempt to adopt a resolution of this magnitude without any debate on the floor of the U.S. House of Representatives,” he said. “It is wrong to have sent members of Congress home and then try to adopt without any debate a precedent-setting resolution that could imperil our Republic.

“The U.S. House must never adopt a resolution that demands the removal of a duly elected president, without any hearings, debate or recorded votes,” Mooney said.