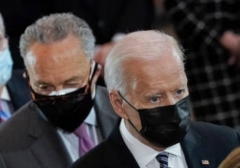 (CNSNews.com) - Senate Majority Leader Chuck Schumer (D.-N.Y.) reacted to the speech that President Joe Biden gave to a joint session of Congress on Wednesday night by sending out two tweets indicating that Senate Democrats will work to help Biden achieve his goals.

“President Biden laid out a comprehensive, thoughtful vision that provides a pathway to success for people across the country,” Schumer said.

“His plan will help restore the American optimism that has been shaken for the last four years,” he said.

“We will do all we can to make @POTUS’s vision a reality,” he said.

“President Biden—unlike his predecessor—laid out the facts and appealed to our better angels,” said Schumer.

“That’s what the Senate Democratic Majority has been working with him to do over the past 100 days,” he said.