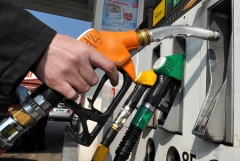 (CNSNews.com) -- Nearly 40% of the Russian Federation's revenue comes from oil and natural gas production, and because President Joe Biden has strangled U.S. fossil fuel production since he entered office Russia is benefitting from today’s higher fuel prices, said James Taylor, president of the Heartland Institute, during a media call on Thursday.

“By having to pay higher energy prices as a cost of doing business, American businesses have been inflicted with a very powerful and unnecessary handicap when trying to compete with businesses in China and elsewhere,” he added.

“Now, on a related note and especially in light of what’s been occurring over the past 24 -48 hours, it’s really important to note that Biden’s failed energy policies are doing more than merely punishing American families,” said Taylor. “They’re strengthening and emboldening Russia.”

“The price of oil, the price of natural gas are just as important to the Russian economy as they are to the Saudi economy,” he continued.  “Oil and natural gas exports provide nearly 40% of Russia’s federal budget revenue, so with Biden’s stifling [of] American oil and natural gas production, global oil prices have more than doubled since Joe Biden’s election -- that’s putting more money in Russia’s pockets.”

In addition to Taylor on the press call were Ben Lieberman, senior fellow at the Competitive Enterprise Institute, and Steve Milloy, founder of Junkscience.com. All three experts spoke about Biden’s climate agenda, which included discussion of energy independence, the increase in fuel/energy prices, and their effect on the American people.

“We can become energy independent because we have huge natural resources,” Milloy said. “We have, you know, fracking heads unleashing the oil and gas sector. We still have plenty of coal. We have nuclear power. And, yes, where appropriate and where it makes sense, you can use solar and wind.”

“I mean, I’ve always been an all-of-the-above guy, whatever makes sense,” he said. “All of these resources are available. They’re essentially limitless and they’re cheap and affordable.”

According to The Heartland Institute, the average American household ended up paying over $1,000 in additional energy costs in 2021. They also paid a higher gasoline cost worth $600, as well as $70 more for electricity.

The Heartland Institute provided a list of the Biden Administration’s environmental actions and policies. A few include:

According to the EIA, the United States imports most of its oil from Canada, Mexico, Russia, Saudi Arabia and Columbia. With the cancellation of the keystone pipeline, the U.S. has not only lost jobs, but gas prices have increased.

Due to the recent Russian invasion in Ukraine, and because Russia is one of the world’s biggest suppliers of oil and gas, this could raise gas prices in the U.S.