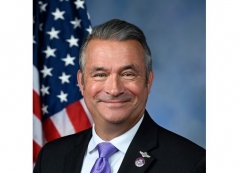 (CNSNews.com) – During a screening and panel discussion of the Media Research Center’s new documentary on the Keystone XL pipeline,  House Rep. Don Bacon (R-Neb.) detailed how the canceling of the pipeline by President Biden is hurting workers and the economy in Nebraska. He also stressed that it was “outrageous” for Biden to support Russia’s Nord Stream 2 pipeline.

“You have President Biden approving a Russian pipeline and canceling ours -- it’s outrageous,” said Rep. Bacon (R-Neb.) at the Feb. 2 event held at the Americans for Tax Reform organization in Washington, D.C.

Joining Bacon at the panel discussion were Iris Miller, communications director of the MRC, and Christian Robey, the MRC’s vice president of external affairs.

The mini-documentary shows how the pipeline expansion, which was supposed to run from Canada south though the Midwest United States to refineries at the Gulf of Mexico, would have created tens of thousands of jobs and pushed America further towards energy independence.

The report highlights news stories on the pipeline, including its energy, jobs, and economic impact, as well as interviews with U.S. workers and public officials who discuss how its cancellation has hurt their communities.

Projected expansion of the Keystone XL pipeline before it was cancelled by the Biden administration. The project had been approved by the Trump administration. (Screenshot, Wall Street Journal)

“It was really important for us to get the message out about the real community impact on the ground,” said the MRC’s Miller. “As conservatives, any of you who do communications understand that we don’t always do a good job connecting with people with a heart-felt story.”

“The left is really good at that,” she said, “and a lot of times we focus on the numbers, one thousand jobs lost, 40,000 overall -- we know it’s much bigger than that -- but those were permanent, on the ground jobs we are talking about. We want to make sure we share the stories.”

Robey commented, “Some people, even some of our free market friends say … ‘the primary goal shouldn’t be energy independence, let the market drive us there.”

“But, there is a strategic priority in energy independence and freeing of markets to allow us to get there, and part of that is the economy,” Robey added. “The economy is a national security asset. How do you think that our country’s pull away from energy independence -- you know the Keystone pipeline is a key part of that, it's the mentality -- how do you think that that’s going to affect future gas prices?”

“It’s a cumulative thing, the pipeline is symbolic of overall policy,” said Rep. Bacon. “It’s no surprise when people look forward, a lot of prices are based on future prices and what people anticipate, it’s the psychology going on when it comes to the markets. So the prices you saw went up over 35% roughly.”

“I think it’s even higher for utility costs,” he continued. “Some people are going to be paying double for utilities, which they paid last year, that’s a significant impact. This [anti-energy] policy will continue to drive up these prices unless we have a change in policy, which I don’t see happening in the Biden administration.”

When asked if Nebraska pipeline employees who lost their jobs reached out to Congressman Bacon, he responded, “Absolutely.”

“The plumbers and the pipefitters, that was their number one issue,” said Bacon. “Then you have the equipment operators – the building trades were totally invested in the pipeline.”

“It’s interesting that their union, traditionally in years past, were Democrat leaning, and I think this decision [to cancel Keystone] pushed many of them into the GOP fold,” he said. “In fact, I think all but one endorsed me and that’s why the pipeline was a huge issue.”

“So, yes, I talked to a lot of the labor folks who were a part of that,” he added.

A study created for the Consumer Energy Alliance discussed the beneficial economic impact that the pipeline had on Nebraska and was projected to have in the future, such as creating 5,517 jobs during the construction phase and 302 operations jobs. Some of these jobs included construction, operation, and maintenance.

On his first day in the Oval Office, Jan. 21, 2021, President Joe Biden signed an executive order killing the Keystone pipeline. According to the Association of Oil Pipe Lines, the result of this decision left 10,000 U.S. employees without jobs.

According to Alfredo Ortiz, president and CEO of Job Creators Network (JCN), “Canceling the Keystone pipeline will eliminate 20,000-30,000 jobs directly and indirectly. These jobs are in Middle America and they belong to hard-working Americans.”