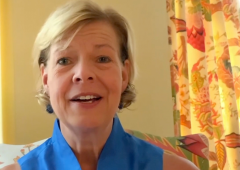 Baldwin did not answer directly but said that is a question "the court will be looking at."

At the U.S. Capitol on Tuesday, CNS News asked Sen. Baldwin, "The Supreme court this fall will review a Mississippi law that bans most abortions after 15 weeks of pregnancy. Is an unborn baby at 15 weeks a human being?"

Baldwin said,  "Uh, those are the questions that the court will be looking at. So, the question will revolve around a previous precedent in Roe v. Wade, and a lot of those questions will come to the fore.  It's going to be a much-watched case."

"The Supreme Court is going to be looking at whether the law passed by Mississippi is constitutional or not."

In the fall, the Supreme Court will hear arguments in Dobbs v. Jackson Women’s Health Organization. Specifically, the Court will seek to decide "whether all pre-viability prohibitions on elective abortions are unconstitutional."

The Mississippi law has been challenged in the circuit courts and the state lost in those rulings.