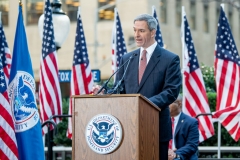 (CNSNews.com) - Acting DHS Deputy Secretary Ken Cuccinelli told Fox News’s “The Story with Martha MacCallum” on Tuesday that House Speaker Nancy Pelosi requested more National Guards be sent to Washington, D.C., even requesting “crew-manned machine guns” – a sharp contrast between how she reacted when President Donald Trump wanted to use the military to deal with the violence from nationwide Black Lives Matter protests.

"Violence has no place and violence must be addressed," Pelosi told National Public Radio’s (NPR) “All Things Considered” in June 2020. "But there is no reason for the U.S. military to be called out for this."

MacCallum noted that 12 members of the National Guard were pulled from their duty in D.C. for what was described as inappropriate texts or social media.
“Well, first of all, my understanding as of the time we sit here, is it was just what you said. They identified inappropriate type of statements. There was no, I repeat, no identified threat from any of these people to the inauguration or any suggestion that I'm aware of that any of them had any intention to do anything other than their duty in the National Guard,” Cuccinelli said.

“I don't know who the 12 are, but that is my understanding. The secretary of defense has spoken similarly to that point. This additional vetting is really a function of the heightened anxiousness in Washington. If only they’d been so anxious about the violence across the country for the last year, we might not have gotten to a point where this seems to some people to be an acceptable form of political expression,” he said.

“You raise a great point,” MacCallum said. She noted that the BLM protests got so violent that the police abandoned the third precinct in Minneapolis, and protesters set the precinct on fire. The officers moved out in the middle of the night and didn’t come back. The protesters ransacked it, but officials in Minneapolis didn’t want the National Guard. Neither did officials in Portland or Seattle.

MacCallum pointed out that in D.C. right now there is a military presence several times the number that are in Iraq and Afghanistan.

“A division. You have a division,” Cuccinelli said, “and the last up of thousands of these troops was requested by the speaker through the Capitol Police. She even wanted crew-manned machine guns in Washington. That was rejected. There's simply no use for that in a security arrangement for a civilian undertaking. So some of this has gone beyond any legitimate security need.

“You know, they're disciplined. They're professional and the Secret Service has been choreographing this very effectively to maintain security and safety. The folks who are here performing security will do a good job. They’re already doing a good job. We've had a very peaceful week as expected,” he said.

“There's been nothing but chatter up to this point, including out in the state capitols, which is also critically important. The world isn’t about Washington. It's supposed to be about everywhere else, which is what the Department of Homeland Security tries to keep secure,” Cuccinelli added.

MacCallum asked Cuccinelli to characterize why there’s been a call for “such a tremendous force” to protect people in the Capitol after what happened on Jan. 6. She said there should be the “appropriate force to deal with the threat that exists,” and she noted that there’s concern about individualized attacks that could happen all across the country.

“That's absolutely a problem, and it all arose on January 6. Part of it is because Congress was the target. Now, there's a special problem related to that from a threat standpoint in a Democratic constitutional republic. At the same time, where was this concern for the rest of America?” Cuccinelli said.

“But when their own butt was on the line, all of a sudden they want every troop and soldier they can find to protect them. We're perfectly happy to contribute to keeping them safe. That's our goal and our job but not at the sacrifice of the rest of America,” he said.

“Congressmen aren’t more important than any other American, and everyone in this country should be kept safe and that's what the Department of Homeland Security has endeavored to do through this entire difficult year,” Cuccinelli added.