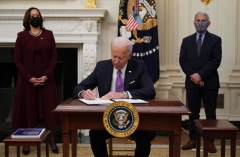 President Joe Biden signs executive orders as part of the Covid-19 response as US Vice President Kamala Harris (L) and Director of NIAID Anthony Fauci look on in the State Dining Room of the White House in Washington, DC, on January 21, 2021. (Photo by MANDEL NGAN/AFP via Getty Images)

(CNSNews.com) - President Joe Biden announced Monday that anyone collecting unemployment who turns down “a suitable job” will lose their unemployment benefits.

As CNSNews.com previously reported, the latest jobs numbers showed the addition of 266,000 jobs in April, far fewer than the 770,000 added in March and the 536,000 added in February.

During a press conference on the economy, Biden announced steps his administration is taking to improve the economy.

The president pushed back on concerns that the 6.1 percent unemployment rate is due in large part to people electing not to go back to work because unemployment benefits pay more than their paychecks.

Still, he tried to discourage people from choosing to continue to collect unemployment benefits despite being offered a job.

“We’re going to make it clear that anyone collecting unemployment who is offered a suitable job must take the job or lose their unemployment benefits. There are a few COVID-19-related exceptions so that people aren’t forced to choose between their basic safety and a paycheck, but, otherwise, that’s the law,” Biden said.

“I know there’s been a lot of discussion since Friday — since Friday’s report that people are being paid to stay home rather than go to work.  Well, we don’t see much evidence of that.  That is a major factor — we don’t see that — that — look, it’s easy to say — the line has been, because of the generous unemployment benefits, that it’s a major factor in labor shortages,” he said, adding that “Americans want to work.”

“I think the people who claim Americans won’t work even if they find a good and fair opportunity underestimate the American people. So we’ll insist that the law is followed with respect to benefits, but we’re not going to turn our backs on our fellow American,” the president said.

“Twenty-two million people lost their jobs in this pandemic through no fault of their own. They lost their jobs to a virus, and to a government that bungled its response to the crisis and failed to protect them,” Biden said.

“We still have 8 million fewer jobs than we did when the pandemic started, and for many of those folks, unemployment benefits are a lifeline.  No one should be allowed to game the system, and we’ll insist the law is followed, but let’s not take our eye off the ball,” the president said.

“Families who are just trying to put food on the table, keep a roof over their head — they aren’t the problem.  We need to stay focused on the real problems in front of us: beating this pandemic and creating jobs,” he said.

Biden also announced that the administration is opening a portal for state and local government to apply for “their first funds from the American Rescue Plan.”

Also, the government is sending out the first relief checks to restaurants and bars through a yearlong program.

Biden said that employers who bring back laid-off part-time workers without those employees “having to give up all of their unemployment benefits.”

The president also announced that his administration is helping people “struggling with the challenge of childcare, which is making it hard for many parents who need to work — especially women — to get back to work.”

“During this crisis, thousands of childcare providers and centers were forced to close because they couldn’t make ends meet with fewer students and higher costs to keep them safe. As a result, parents lost support — lost the support system they depended on for childcare, and tens of thousands of childcare workers lost their jobs. In fact, there are 150,000 fewer childcare jobs now than there were pre-pandemic,” he said.

“The American Rescue Plan has already allocated funds to states to address the immediate challenge to our economy and of too few childcare operations,” the president said.

Biden called it “the largest investment in childcare since World War II.”

“Today, my administration is releasing guidance to states to help get the funds they need out the door as quickly as possible to allow dramatic expansion and availability of childcare in this country.  With these funds, states can help hundreds of thousands of providers reopen and stay open and provide safe and healthy learning environments for more than 5 million children,” he said.

“These funds will also allow states to provide over 800,000 families with subsidies to pay for childcare.  Simply put, it’s going to help working parents get back to work. This one-time investment is a — is a real answer to a real problem where our economy is facing right now,” the president added.