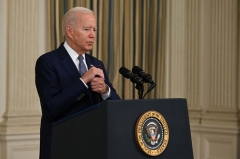 President Joe Biden delivers remarks on the August jobs report in the State Dining Room at the White House in Washington, DC on September 3, 2021. (Photo by JIM WATSON/AFP via Getty Images)

(CNSNews.com) – President Joe Biden said Friday that he respects those who don’t support Roe v. Wade, the 1973 U.S. Supreme Court decision that legalized abortion, and who believe that life begins at conception, but he said he doesn’t agree with them.

Therefore, he said he has directed the DOJ to look at ways to “limit the independent action of individuals in enforcing” the Texas abortion law.

After delivering remarks on the latest jobs report, the president was asked, “One question, abortion rights in Texas, sir. What would be your message to women in Texas and what can your administration do to protect abortion rights on the federal level?”

“I'm late for going down. I’m going to talk about these things from Louisiana, but I have been, continue to be a strong supporter of Roe v. Wade, number one, and the most pernicious thing about the Texas law, it sort of creates a vigilante system where people get rewards to go out -- anyway, and it just seems -- I know this sounds ridiculous, almost un-American what we’re talking about, not the debate about-- I respect people who think that, who don't support Roe versus Wade,” Biden said.

“I respect their views. I respect those who believe life begins at the moment of conception,” the president said.

“I respect that, don't agree, but I respect that, not going to impose that on people, but what I was told and I must tell you - I am not certain - I was told that there are possibilities within the existing law to have the Justice Department look and see whether are there things that can be done that can limit the independent action of individuals in enforcing a federal sys-- a state law. I don't know enough to give you an answer yet. I’ve asked that to be checked,” he said.

As CNSNews.com previously reported, the White House claims that the Texas abortion law “deputizes private citizens to bring lawsuits against anyone who they believe has helped another person get an abortion, which might even include family members, healthcare workers, front desk staff at a health care clinic, or strangers with no connection to the individual[s].”

“And I would note for those of you who didn’t see: People who report who — who — these private citizens could get up to $10,000 for reporting somebody who is seeking an abortion,” said the press secretary.