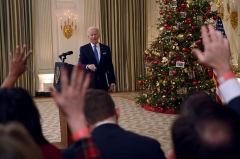 President Joe Biden answers questions after speaking about the status of the country's fight against COVID-19 and the Omicron variant, in the State Dining Room of the White House in Washington, DC, on December 21, 2021. (Photo by BRENDAN SMIALOWSKI/AFP via Get

(CNSNews.com) - When asked whether Sen. Joe Manchin (D-W.Va.) broke his commitment to President Biden when he announced the framework for the Build Back Better Act, the president said he and Manchin would “get something done.”

When asked whether Manchin kept his word and how would the president rebuild trust with progressives in the part to advance the legislation, Biden said, “I told you before -- you heard me say this before. Some people think maybe I'm not Irish because I don't hold a grudge. I want to get things done. I still think there's a possibility of getting Build Back Better done."

What I don’t want to do is get in– and Joe went on TV today -- I don't know if it's TV or not. I’m told he was speaking to the liberal caucus in the House and said, Joe Biden didn’t mislead you, I misled you. So look, I'm not looking for -- let me say something. You saw what happened yesterday.

All the talk about how my Build Back Better plan was going to increase inflation and cause these debts and all the like. What happened? Goldman Sachs said if we don't pass build back better we're in trouble because it's going to grow the economy. Without it, we're not going to grow. What happened? Stock prices went way down. It took a real dip.

If you take a look, everybody thinks because I quoted 17 Nobel laureates saying this is going to help inflation. Think about it in terms of you're a hard working person and you’re making $60,000 if you're alone. If you're a mom, you’re just on your own or if you’re making $80,000. Mom and Dad $90,000 like a lot of people do and you’re worried about inflation. You should be worried about it, because it's a devastating thing for people who are working class and middle class folks. It really hurts.

Where is most of the cost now? The cost is finding it in gasoline even though I was able to bring it down 12 cents a gallon. It will come down more I believe. We talked about the food prices going up. Look what’s in build back better. Child care. You can reduce it by up to 70%. That'll be the difference between 20 million women who’ve gone out of the workforce being able to go back in the workforce being able to go back.

Imagine being a parent, looking at their child and you can't afford -- you have no house to borrow against. You have no savings. It’s wrong but all the things in that bill are going to reduce prices and cost for middle class and working class people. It's going to reduce their cost -- what is inflation?

Having to pay more than the money you have because things have gone up? Bring down all of those costs, the cost of work from child care to the child care tax credit. I'm not supposed to be having this press conference.