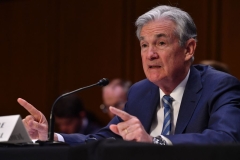 Jerome Powell, Chairman, Board of Governors of the Federal Reserve System testifies before the Senate Banking, Housing, and Urban Affairs Committee on June 22, 2022 in Washington, DC. (Photo by NICHOLAS KAMM/AFP via Getty Images)

(CNSNews.com) - Federal Reserve Chairman Jerome Powell admitted on Wednesday that despite President Biden’s assertions to the contrary, the war in Ukraine was not the primary driver of inflation.

During a Senate Banking Committee hearing, Sen. Bill Hagerty (R-Tenn.) asked, “Given how inflation has escalated over the past 18 months, would you say that the war in Ukraine is the primary driver of inflation in America?”

To which Powell replied: “No, inflation was high before, certainly before the war in Ukraine broke out.”

“You and the president have framed this war in Ukraine as the primary driver of the spikes in energy costs that’s the largest contributor to overall inflation, but the Fed chairman was on the Hill today testifying. He was asked the question, is the war the primary driver of inflation, and his answer was no. How do you square that? Is he wrong?” Fox News White House Correspondent Jacqui Heinrich asked.

GRANHOLM: I didn’t hear what he said on that, but I think most people acknowledge that the price of fuel is a big driver of inflation, and in fact, they have put large percentages on it. So we know that the war in Ukraine, having driven up the price of fuel, because it crimps supply. It’s a little supply and demand question.

We’ve got to make up for the million barrels per day that have lost. We will have a demand problem when China opens up after COVID. There will be additional upward pressure on supply. This is why we need not just in the U.S., but we need globally, more supply brought on board and so–

HEINRICH: His full quote was, ‘No, inflation was high before certainly before the war in Ukraine broke out.’

GRANHOLM: I think most would say that the price of fuel has exacerbated inflation.

HEINRICH: Is there any concern that this gas tax holiday will increase demand and then thereby increase inflation? Some economists and analysts are raising that.

GRANHOLM: Yeah, I understand that, and I also know that this president is focused on costs for real people and this cost of gas is the most real for people at the pump, so he wants to do everything. He understands the importance of– he’s very concerned about inflation obviously. It’s a top priority, and he’s also concerned about this price at the pump, and he’s going to do what he can to do– to resolve that.