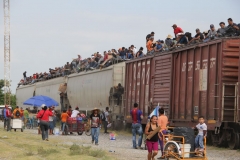 Central American immigrant get on the so-called La Bestia (The Beast) cargo train, in an attempt to reach the Mexico-US border, in Arriaga, Chiapas state, Mexico on July 16, 2014. (Photo by ELIZABETH RUIZ/AFP via Getty Images)

(CNSNews.com) - Sen. Robert Menendez (D-N.J.) challenged the Republican Party to pass an immigration reform bill crafted by President Joe Biden and introduced by Democratic lawmakers on Thursday, saying that as the 2020 election has proven, the Latino vote does not exclusively belong to the Democratic Party.

“We're here today because last November, 80 million Americans voted against Donald Trump and against everything he stood for. They voted to restore common sense, compassion and confidence in our government, and part of that mandate is fixing our immigration system, which is the cornerstone of Trump’s hateful horror show,” Menendez said at a virtual press conference with Democratic lawmakers to introduce the U.S. Citizenship Act of 2021.

He said that the reason why Democrats did not get “immigration reform over the finish line is not because of a lack of will” but “because time and time again we have compromised too much and capitulated too quickly to fringe voices who have refused to accept the humanity and contributions of immigrants to our country and dismissed everything no matter how significant it is in terms of national security as amnesty.”

“From John Boehner who blocked comprehensive reform from reaching the House floor from white nationalists like Steve King and Jeff Sessions to a manipulative madman named Donald  Trump, there will always be those who stand against immigrants, believing reform is somehow a political loss to Republicans and not a win for the United States of America,” he said.

“To my Republican colleagues I say this: stop pretending like you know the political outcomes of immigration reform. When it comes to the Latino vote especially I think this last election proved we are not owned by any one party but we are the largest racial and ethnic minority in the country, and our votes should matter more to you than most who stormed the Capitol on January 6,” Menendez said.

“And to my Democratic colleagues who I hope will join us as co-sponsor in the coming days - and we already have many - I also have a message. We have an economic and moral imperative to pass big, bold and inclusive immigration reform, reform that leaves no one behind, not our Dreamers and TPS holders, not our farmworkers and meatpackers, not our essential workers and not our parents, friends and neighbors,” he said.

“What the immigrant community was just put through this past four years was beyond cruel. Trump assailed Dreamers and TPS holders to strip their legal status. He slashed legal channels of immigration into our country. He stole from our military to pour billions into an ineffective border wall, and instead of addressing the root causes of migration, he cut off aid to Central America,” Menendez said.

“He desecrated our reputation on the world stage by imposing cruel policies that literally tore babies out of their mothers’ arms, caged children, permanently separated hundreds of families and turned Lady Liberty’s back on refugees yearning for peace, security and opportunity, but undoing Trump’s damage and passing minor reforms is not enough,” he said.

“Our current system is riddled with inefficiencies and needless cruelties. Under the status quo, we still prevent family members from reuniting legally in the United States because of lengthy backlogs and delays,” the senator said.

“We still send graduates educated in our great universities back to their home countries instead of allowing them to drive innovation here in America, and we still make it too hard for companies to hire the workers they need to innovate and force American workers to compete with exploited undocumented labor,” Menendez said.

He said that the U.S. Citizenship Act, which is being introduced in the House and the Senate, will bring life to Biden’s “plan to restore humanity and American values to our immigration system.”

“It’s our vision of what immigration reform should look like, and it’s a bill we can all be proud of. It will modernize our system, offer a path to citizenship for hard-working people in our communities, reunite families, increase opportunities for legal immigration and ensure America remains the powerhouse for innovation and a beacon of hope to refugees around the world,” Menendez said.

He said the bill will enhance security, improve management of the southern border, and address “the push factors forcing so many families to flee Central America in the first place: transnational crime, violence, corruption, poverty, lawlessness.”

“The prior administration’s naive fixation on the wall failed to alleviate these horrific conditions. We must address the underlying root cause in driving migration and create safer processes for those in danger to apply for asylum. That’s how we stop ourselves from winding up in the exact same place down the road, and that’s what this bill does,” the senator said.

“Now, there are some in Congress, I'll say from both parties who argue against going big on immigration reform. Some still believe the answer lies in blocking all legal channels of our immigration system until we get our house in order. Others say we should leave the bigger, tougher questions for another day, pursuing narrow reforms that nibble at the edges and leave many millions of people behind.

“These are good and decent people who believe in the promise of America down to their bones. They did not come here for handouts. They came here for hard work, and that’s exactly what they do each and every day. They work really hard. They pick our fruit. They pack our meat. They keep our food supply strong even in times of crisis like this pandemic. They are essential workers, so essential that our economy would not function without them. Yet, they live under constant fear of deportation.

According to Menendez, the bill would give 11 million “undocumented” a chance to come out of the shadows, pass criminal background and national security checks, secure lawful immigration status, apply for green cards after 8 years in which they begin the process.

The senator said that in his state of New Jersey, 9,000 American-born children call a TPS holder mom or dad.

“Nationwide at least 5.9 million American children have an undocumented parent. This legislation lives up to the conviction that families belong together,” he said.

“To those who want to call this amnesty,” angels could come from above and swear “that this is the best tailored legislation, that it will secure our border, regularize our system, and they would say, no, it’s amnesty. They will never be satisfied,” Menendez said.

“These politicians and pundits who preach xenophobia and hate, I say this. Preserving the status quo deprives our country of economic benefits that come with inclusive and lasting immigration reform,” he said.

The senator also had a message for those who think the bill doesn’t have a chance of passing the Senate for 60 votes. “We won’t know until we try,” Menendez said.