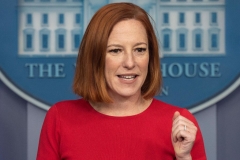 (CNSNews.com) – White House Press Secretary Jen Psaki said Friday that it is true that President Biden’s Build Back Better Act will not increase the deficit by a single cent despite the Congressional Budget Office (CBO) saying that the bill would add $367 billion to budget deficits over the next 10 years.

“Is the president going to stop saying that the Build Back Better plan does not increase the deficit one single cent ... now that we know that is not true?” Fox News White House Correspondent Peter Doocy asked.

PSAKI: It is true, and I would note that several economists and experts out there, I would note--- I think you’re talking about the CBO score—

DOOCY: Which Joe Biden himself in 2010 called the gold standard for Democrats and Republicans.

PSAKI: Well Peter, since we’re all here to communicate with the public about accurate information, what I would just note is that one of the components that experts, Democrats and Republicans, including former heads of the CBO have pointed to is that IRS, IRS enforcement is not something that there’s a lot of experience in the CBO us scoring.

DOOCY: The CBO’s projection is that it’s going to--- that there’s going to be at least a $160 billion increase to the deficit over 10 years. That is 16 trillion cents. So the president was not telling the truth.

PSAKI: Well, Peter, just to go back to the content facts here, so the IRS enforcement component – something recommended by former Secretary Hank Paulson, former Secretary Larry Summers, Democrats and Republicans of both parties who feel there could be significant savings over the course of time. I’m just going to note something that for—Trump-appointed IRS Commissioner Charles Rettig said. ‘The administration estimates $400 billion in additional revenue can be generated over the next decade from enforcement efforts focused on higher earned incomes, shrinking the tax gap. This figure is no surprise.’

Republican former Treasury Secretary Hank Paulson co-wrote an op-ed with other former Treasury secretaries, saying that there could be considerably more revenue than we projected from the White House from this, so again, this is an area where experts, economic experts – neither of us are one; I think we can confirm that – have confirmed that there are significant savings that will come from this.

That is why moderate members of the House, I think they would tell you, and many of them have spoken to this, including Congressman Kurt Schrader who’s one of the moderates who’s on the borderline given deficit impacts have said they felt comfortable with it because for the expertise out there about the impact of IRS enforcement.

PSAKI: Actually, we’ve praised the overall work of the CBO on the Build Back Better Act repeatedly, and that’s what we believe, but again, I would point to the fact that there isn’t a great deal of history or experience in scoring IRS enforcement. That’s something that economists across the board have noted. That’s something that leaders on the Hill, Democrats and Republicans have been briefed on for several months now, and that’s why it wasn’t really a surprise to them and why the vote in part moved forward.