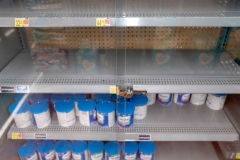 Grocery store shelves where baby formula is typically stocked are locked and nearly empty in Washington, DC, on May 11, 2022. (Photo by STEFANI REYNOLDS/AFP via Getty Images)

(CNSNews.com) - White House Press Secretary Jen Psaki on Friday defended the Biden administration sending pallets of baby formula to migrants at Border Patrol facilities on the southern border while parents in the U.S. are struggling to find formula on store shelves, by saying it’s been the law since 1997 to provide “adequate good” or formula for kids under one.

“Rep. Elise Stefanik, and she tweeted something I’ll read to you, but several other Republican politicians have also gone along those lines. She says Joe Biden continues to put America last by shipping pallets of baby formula to the southern border as American families face empty shelves. She says this is unacceptable. Do you have a response to that?” a reporter asked.

“We do like facts here so let me just give you a little sense of the facts on this one. There’s something called the Flores Statement– Settlement, which she may or may not be aware of that’s been in place since 1997. It requires adequate food and elsewhere specifies age appropriateness, hence formula for kids under the age of 1,” Psaki responded.

“That is the difference from the last administration. It is the law, but we believe that when children and babies or babies, I should say, are crossing the border with a family member that providing them formula is morally right, and so we certainly support the implementation of it,” the press secretary added.

This comes after Rep. Kat Cammack (R-Fla.) tweeted a photo on Thursday showing "shelves and pallets packed with baby formula" at the Ursula Border Control processing center in McAllen, Texas, while parents scramble to find much needed baby formula on grocery shelves.