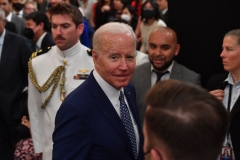 President Joe Biden attends a bill signing ceremony for a legislation to establish a commission to study the creation of a National Museum of Asian American History, in the East Room of the White House on June 13, 2022 in Washington, DC. (Photo by NICHOLAS KAMM/AFP via Getty Images)

When asked why the Biden administration keeps referring to record high gas prices as Putin’s price hike, Cammack said, “Yes, it is 100% embarrassing. Do these people live in reality? Have they gone outside and filled up their gas tank? Oh, I'm sorry, Nancy Pelosi hasn't filled up gas tank in 40 years let alone Joe Biden.

“It's easy to make ridiculous statements that are completely devoid of reality when you are a limousine liberal who basically governs from the protection of armored vehicles and have a staff of people who do things for you, but out here in the real world Americans are facing 5,500-dollar a year increase, and that's the inflation tax,” she told Fox Business’ “Mornings with Maria Bartiromo.”

“That's what every day Americans are paying because of these disastrous policies, and do they not see the stock market crash yesterday? We are officially in a bear market. Crypto loss over 200 billion over the weekend. I mean, everything is down, what are they saying, it is embarrassing, and quite frankly it's getting dangerous,” the congresswoman said.

Cammack warned that the more the federal government spends, the less the American people get to keep their own money.

“Doing the same thing over and over and expecting a different result, 100 percent definition of insanity, but we know especially in Washington, D.C., common sense isn't common, and listen, I know I may only have a minor in economics, but economics 101: the more that government spends, the less we the people get to keep in our pockets and last year we saw Democrats spend upwards of $7 trillion,” she said.

“Did they think there would be no consequences for out-of-control spending? It's clear when you compound the supply chain crisis and bad policies coupled with this hyper aggressive Green New Deal agenda pushed by limousine liberals, that is going to result in clearly a recession, and everyday Americans - those that the left says that they stand up and fight for most - are the ones getting hit the hardest,” the congresswoman warned.

“When I was on the way to the airport yesterday, gas was $5.19 in my hometown. Now if you are a senior on a fixed income, you are having to make the decision between gas or groceries and now we see a reconciliation package that could potentially drive up more spending, which would just further compound the hits that the lower and middle class is taking. It's a disaster, all the more reasons why the Republicans have to take the House back,” she said.

When asked how Republicans will tackle inflation if they win control of the House, Cammack said, “Well, it starts by cutting government spending. You can't spend, spend and expect for prices to go down and, in fact, that's part of the reason why we are seeing so many of the challenges. We have a government that's paying people not to work.

“They are staying at home and when the White House says, oh, people are doing better than they ever have, things are up, no, people's COLA got wiped out in the first few months of this administration because of inflation, and all these XYZ policies that have nothing to do with the kitchen table issues, that is what is really driving the spending,” the congresswoman said.

“We need to get down to the basics, return the programs that have no constitutional authority under the federal government to the states, stop the unfunded mandates and stop this crazy wish list of agenda items that cannot survive in a free market economy. We have got to get to the basics and get back to kitchen-table issues. That's how we win in November and how we rectify the situation in the next Congress,” she said.