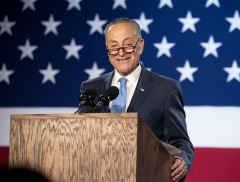 (CNSNews.com) - Incoming Senate Majority Leader Chuck Schumer (D-N.Y.) accused President Donald Trump of using “a pathological technique used by the worst of dictators” by blaming others for the violence he fomented.

Speaking to reporters in New York City, Schumer commented on Trump’s remarks on Tuesday morning, in which the president said the impeachment that Democrats are pursuing in the remaining days he has in office “is causing tremendous anger” and “tremendous danger.”

“What Trump did today, blaming others for what he caused, is a pathological technique used by the worst of dictators. Trump causes the anger. He causes the divisiveness. He foments the violence and blames others for it. That is despicable,” he said.

“The technique Trump is using is used by the worst dictators the globe has ever seen. Donald Trump should not hold office one day longer, and what we saw in his statements today is proof positive of that, if you needed any further proof, which I didn't,” the Senate Democratic leader said.

As CNSNews.com reported, speaking to reporters on the White House lawn prior to leaving for Texas, Trump said, “As far as this is concerned, we want no violence, never violence. We want absolutely no violence, and on the impeachment it's really a continuation of the greatest witch hunt in the history of politics. It's ridiculous. It's absolutely ridiculous. This impeachment is causing tremendous anger, and you're doing it, and it's really a terrible thing that they're doing.

Later, speaking at Joint Base Andrews prior to his departure, the president said he’s never seen such anger as he’s seeing right now, adding that “you have to always avoid violence.”

When asked what his role was in the Capitol Hill riot, the president said that his speech prior to the riot “was totally appropriate.”

Schumer continued his call for Trump to resign or Vice President Mike Pence and Trump’s cabinet to invoke the 25th Amendment or the Democrats will move forward with impeachment. He also disputed outgoing Senate Majority Leader Mitch McConnell’s (R-Ky.) assertion that he can’t call the Senate back for an impeachment trial.

“As I’ve said, if he won't resign and Vice President Pence and the cabinet won't invoke the 25th amendment, he will be impeached by the House and, as the law requires, tried by the Senate. Okay. Now about the Senate trial. So leader McConnell is saying he can't call the Senate back after the House votes for impeachment, because it requires unanimous consent, the consent of every senator. That's not true,” Schumer said.

“We can come back ASAP to come back and vote to convict Donald Trump and get him out of office now before any further damage is done. The legislation that passed in 2004 puts a dagger through the heart of this idea that you need unanimous consent for every senator to call back the office,” the minority leader added.

Schumer’s remarks were interrupted by a heckler, who called the minority leader a “racist” and “anti-Semite.”

At the beginning of the press conference, Schumer spoke about the DOJ’s efforts to arrest Trump supporters who stormed the U.S. Capitol building and how those individuals have also been placed on the no-fly list.

“The law says that acts of terror, like those perpetrated by the people who unlawfully and violently breached the Capitol must be considered threats to the homeland. Once you're considered a threat to the homeland, you should and must be placed on the no-fly list, plain and simple. The threats to violence cannot be allowed to fly and neither can these individuals,” he said.

“Let me give you a little more background. Many of the individuals who were part of the attack last week, as I said, remain at large, are wanted for questioning, violent acts and more. The founding member of the Proud Boys of Hawaii was arrested last Thursday, accused of unlawful entry into the Capitol Building, captured in an airport in Hawaii,” Schumer said.

“According to ‘The Times,’ the Justice Department and the FBI have embarked on a nationwide manhunt to track down scores of people - and now it's even larger - who’ve attacked the Capitol. With so many questions about safety and the worry about future possible threats, the least we can do is make the skies, the inauguration, the Capitol and the country safer. That's what I'm asking be done today,” he added.