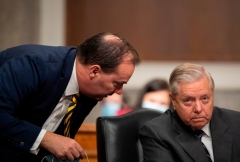 Senator Mike Lee (L) speaks with Chairman Lindsey Graham during a Senate Judiciary Committee Executive Business meeting, including the nomination of Amy Coney Barrett to serve as an associate justice on the Supreme Court of the United States, in Washington, DC, on October 22, 2020. (Photo by CAROLINE BREHMAN/CQ Roll Call/AFP via Getty Images)

“We are not going to forget about the blocking and tackling of politics. I will never take my eye off the ball of taking care of the state interest in Washington. Now I also want to find common ground where I can. Aren't you glad that this election’s coming to an end? I've had two calls already. One from President Trump. He's going to win! He is going to win!” Graham said in his acceptance speech.

“To all the pollsters out there, you have no idea what you're doing, and to all the liberals in California and New York, you wasted a lot of money. This is the worst return on investment in the history of American politics,” he said.

Graham praised Harrison, who called to concede the election. 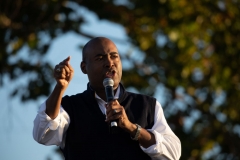 “He was very gracious. He created an incredible campaign for the first time he's ever run for office. He raised more money than anyone in the history of the United States Senate. I think I had a lot to do with that, but Jamie, I appreciate the phone call. I will do my best to unite us where I can. You are a good father. You are a good husband. You're a good man, and I look forward to working with you where I can, and congratulations to all the people who worked on your behalf.”

Harrison spent $104 million in his bid to unseat Graham.