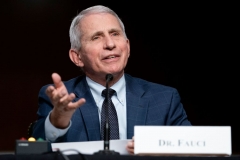 Dr. Anthony Fauci, White House Chief Medical Advisor and Director of the NIAID, gives and opening statement during a Senate Health, Education, Labor, and Pensions Committee hearing to examine the federal response to Covid-19 and new emerging variants on January 11, 2022 at Capitol Hill in Washington, DC. (Photo by GREG NASH/POOL/AFP via Getty Images)

(CNSNews.com) – Sen. Rand Paul (R-Ky.) grilled Biden’s chief medical adviser Dr. Anthony Fauci on Tuesday on Fauci’s contention that those who criticize him are criticizing science, because he represents science.

Paul also accused Fauci of conspiring with NIH Director Dr. Francis Collins to takedown “three prominent epidemiologists” from Harvard, Oxford, and Stanford Universities that they deemed to be “fringe.”

Fauci disputed Paul’s accusations and responded by pointing out that he has received death threats, his family has been harassed, and that a man was arrested in Iowa who told police he was on his way to the nation’s capital to kill Fauci.

During a Senate Health. Education, Labor and Pensions (HELP) Committee hearing on addressing new COVID-19 variants, Paul said, “The idea that a government official like yourself would claim unilaterally to represent science, that any criticism of you would be considered a criticism of science itself is quite dangerous.

“Central planning whether it be of the economy or of science is risky because of the fallibility of the planner. It would not be so catastrophic if the planner was simply one position in Peoria. Then the mistakes would only affect that physician’s patients and people who chose that physician,” the senator said.

“When the planner is a government official like yourself who rules by mandate, the errors are compounded and become much more harmful. A planner who believes he is the science leads to an arrogance that justifies in his mind using government resources to smear and to destroy the reputations of other scientists who disagree with him,” he said.

“In an email exchange with Dr. Collins you conspire, and I quote directly from the email ‘to create a quick and devastating published takedown of three prominent epidemiologists from Harvard, Oxford and Stanford,” Paul said.

“Apparently, there’s a lot of fringe epidemiologists a Harvard, Oxford and Stanford, and you quote in the email that they were from Dr. Collins, and you agree that they are fringe. Immediately, there’s this takedown effort,” the senator said.

“A published takedown though doesn’t exactly conjure up the image of a dispassionate scientist. Instead of engaging them on the merits, you and Dr. Collins thought to smear them as fringe and take them down, not in journals, in lay press,” he said.

“This is not only antithetical to the scientific method, it’s the epitome of cheap politics, and it is reprehensible Dr. Fauci. Do you think it's appropriate to use your 420,000 salary to attack scientists that disagree with you?” Paul asked Fauci.

FAUCI: The email you are referring to was an email of Dr. Collins to me. If you look at the email.

PAUL: That you responded to and hurried up and said I can do it. I can do it. We got something in Wire magazine.

FAUCI: No, no, I think in usual fashion, senator, you are distorting everything about me.

PAUL: Did you ever object to his characterization of them as fringe? Did you write back to Dr. Collins and say, no, they are not fringe, they’re esteemed scientists, and it would be beneath me to do that?

PAUL:  You responded that you would do it. You immediately got an article in Wired and you sent it back to him and said, Hey, look, I've got them and I nailed them in Wired, of all scientific publications.

FAUCI: That's not what went on. There you go again. You just do the same thing every hearing.

PAUL: That was your response. This wasn't the only time. So your desire to take down people.

FAUCI: You are absolutely incorrect as usual, senator. You are incorrect almost everything you say.

PAUL: This wasn't the only time. Your desire to take down those who disagree with you didn't stop with Harvard, Oxford, and Stanford. You conspired with Peter Daszaq, who you communicated with privately, and other members of the scientific community that wrote opinion pieces for Nature. Five of them signed a paper for Nature, an opinion piece. 17 signed a paper that called it conspiracy theory - the idea that the virus could have originated in the lab. Do you think words like conspiracy theory should be in a scientific paper?

FAUCI: Senator, I never used that word when I was referring to it. You’re distorting virtually everything.

PAUL: Did you communicate with the five scientists who wrote the opinion piece in Nature where they were describing there’s no way this could have come from a lab.

FAUCI: This was not me.

PAUL: Did you talk with any of those scientists privately?

FAUCI: You keep distorting the truth. It is stunning.

PAUL: Did you talk to any of the scientists privately who wrote the opinion?

PAUL: You did. What were they telling you privately?

FAUCI: Let me explain. You know you are going back to that original discussion when I brought together a group of people to look at every possibility with an open mind. Not only are you distorting it, you are completely turning it around as you usually do.

FAUCI: Senator, we are here at a committee to look at a virus now that has killed almost 900,000 people and the purpose of the committee was to try and get things out how we can help to get the American public, and you keep coming back to personal attacks on me that have absolutely no relevance to reality.

FAUCI: Senator, first of all, if you look at everything that I said you accuse me of in a monolithic way telling people what they need to do. Everything that I’ve said has been in support of the CDC guidelines. Wear a mask. Get boosted.

FAUCI: So again, madam chair I would like a couple of minutes because this happens all the time. You personally attack me and with absolutely not a shred of evidence of anything you say. So I would like to make something clear to the committee. He’s doing this for political reasons. What you need to do is – he’s said in front of this committee.

PAUL: Do you think your takedown of prominent epidemiologists was not political? That was my question?

FAUCI: You won’t let me finish. You know what I'm going to say.

PAUL: That was the question. Are you political in taking down these three prominent epidemiologists?

MURRAY: Senator Paul. I’m going to allow Dr. Fauci to respond. We have a number of senators who would like to ask questions and I would like him to be able to respond.

FAUCI: So the last time we had a committee or the time before, he was accusing me of being responsible for the death of 4 to 5 million people, which is really irresponsible, and I say, why is he doing that? There are two reasons why that’s really bad.

The first is it distracts from what we're all trying to do here today is get our arms around the epidemic and the pandemic that we're dealing with, not something imaginary.

Number two, what happens when he gets out and accuses me of things that are completely untrue is that all of a sudden that kindles the crazies out there, and I have threats upon my life, harassments of my family, and my children with obscene phone calls, because people are lying about me.

Now, I guess you could say that's the way it goes, I can take the hit. Well, it makes a difference, because as some of you may know, just about three or four weeks ago on December 21st, a person was arrested who was on their way from Sacramento to Washington, D.C., at a speed stop in Iowa, and they asked -- the police asked him where he was going, and he was going to Washington, D.C., to kill Dr. Fauci, and they found in his car an AR-15 and multiple magazines of ammunition, because he thinks that maybe I'm killing people. So I asked myself, why would senator want to do this? So go to Rand Paul website and you see fire Dr. Fauci with a little box that says contribute here. You can do $5, $10, $20, $100. So you are making a catastrophic epidemic for your political gain. So the only thing that I could---

PAUL: You have politically attacked your colleagues, and in a politically reprehensible way, you attacked their reputations. You won't defend it or argue it. You’ll just simply turn around the attack.

COMMITTEE CHAIRWOMAN PATTY MURRAY: I’m sorry. We're going to continue this hearing. We have a number of questions from other senators.

MURRAY: Dr. Fauci I appreciate your response but we have a number of questions from senators and we do have a second round, and I'm being asked to make sure that everybody has their time. Thank you.