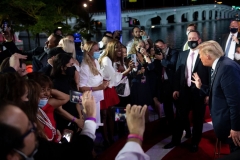 President Donald Trump speaks with audience members after participating in an NBC News town hall event at the Perez Art Museum in Miami on October 15, 2020. (Photo by BRENDAN SMIALOWSKI/AFP via Getty Images)

(CNSNews.com) – The pandemic has changed a lot on the issue of immigration, President Donald Trump said Thursday when challenged by NBC’s Savannah Guthrie about his administration not accepting new applicants to the DACA program.

“You have been promising this immigration bill since -- well, at least July when you told my colleague on Telemundo. It was coming, but nothing has come yet,” Guthrie said.

“The fact is we got rid of catch and release, which was a disaster. You know, you catch somebody - they could be a murderer. They could be rapists, and we're supposed to release them into our country. These are the laws that I inherited. We ended that program. No, I think you'll see something very, very good. The whole immigration -- if you look at what's going on, people used to pour into your country, and especially during the pandemic. I think even you, Savannah, will be very impressed,” the president said.

During NBC’s town hall, a voter named Paulette Dale who was described as a Republican who voted for Hillary Clinton in 2016 who is leaning slightly towards voting for former Vice President Joe Biden, started off by complimenting Trump’s smile then asking if he plans to purse cuts to the DACA program.

DALE: I have to say, Mr. President, you have a great smile.

DALE: He does. You're so handsome when you smile. As the daughter of immigrants to the United States, who fled eastern Europe due to religious persecution. The United States immigration policies are very personal for me. Surveys show that most Americans and the majority of Republicans support the Dreamers program. So my question for you, Mr. President, is, if you are elected to a second term, do you expect to pursue your previous efforts to cut the DACA program? Why or why not?

TRUMP: And DACA is somewhat different than Dreamers, you understand that, and you understand it better than anybody probably in this room. Where do you come from, by the way, originally?

DALE: My grandparents were from Russia and Poland.

TRUMP: That's very good. Okay. So we are going to take care of DACA. We're going to take care of Dreamer. It's working right now. We're negotiating different aspects of immigration and immigration law. We built now over 400 miles of wall-to-wall southern border. Mexico’s working very closely with us. We have the strongest border we've ever had. We want people to come into our country. They have to come in legally, but we're working very hard on the DACA program, and you will be I think very happy over the course of the next year. Because I feel the same way as you do about it.