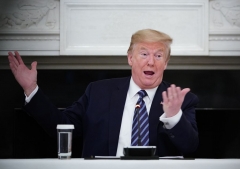 (CNSNews.com) - President Donald Trump complained Monday that the Democrats are moving slowly to reopen the country for political reasons, and if it were up to them, they would wait until the November election.

“The great people of Pennsylvania want their freedom now, and they are fully aware of what that entails. The Democrats are moving slowly, all over the USA, for political purposes. They would wait until November 3rd if it were up to them. Don’t play politics. Be safe, move quickly!” he tweeted.

When asked to respond to criticism that he’s also politically motivated to grow the economy ahead of the election, Trump said, “Well, I think that if you look at Pennsylvania as an example, if you look at various other states, I won't get into them, the people want to go back. The numbers are getting to a point where they can, and it just seems to be no effort on certain blue states to get back into gear.

The president pointed out that people who are staying home are still dying.

“You can make the case it's in even greater numbers. So it's a situation that some people and I've noticed that some states could be moving more quickly and also at the same time safety. Safety is paramount, but people are dying in the lockdown position too. Everybody understands that,” Trump said.

The president said the numbers of new infections have substantially decreased compared to two weeks ago.

“We had to turn off our whole magnificent economy. We had to turn down the whole country. We're at the lowest of all of the models. If you look at I guess 100 - 120,000 people would be at the low side. There’s nothing low. One is too many people. I say it all the time. One person to lose for this is too many people. It's a disgrace what happened,” the president said.

“If you look at models, we're at the lowest of those projections. Models are not models done necessarily by the White House. They’re models done by many people all over the world. If you take the most respected of those people, many of those models are wrong. They've been wrong as far as the U.S. Is concerned, because those numbers are nowhere near what was projected potentially,” he said.

As far as what he predicts the death toll will be this summer Trump said he doesn’t even want to think about it.

“We had about 40,000 people coming in from China from Asia, and we had to obviously take the people. Can you imagine if I had said, ‘You’re a U.S. citizen. We’re not going to take you.’ That doesn’t work. I was with Ron Desantis. He said they literally put people that came in from China in quarantine for a substantial period of time. That was a big decision,” he said.