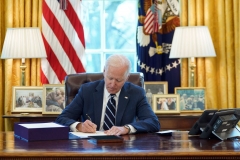 (CNSNews.com) - President Joe Biden has not given up the option of legal action in extending the eviction moratorium, which expired on Saturday, the White House said on Monday.

White House Press Secretary Jen Psaki was joined at the White House by White House American Rescue Plan Coordinator and Senior Advisor to the President Gene Sperling, who spoke in detail about the efforts that the president is making to stave off evictions during the pandemic.

According to Sperling, Biden proposed extending the moratorium until Sept. 30th when he took office, but “that was not possible due to reconciliation rules.”

“He has also supported the CDC extending the CD — their eviction moratorium — first from June 20th to May 31st, then from May 31st until June 30th, and then, even when there was legal questions and legal risk, he supported them extending it through July 31st,” Sperling said.

“Unfortunately, the Supreme Court declared on June 29th that the CDC could not grant such an extension without clear and specific congressional authorization, but given the rising urgency of the spread of the Delta variant, the president has asked all of us, including the CDC, to do everything in our power to look for every potential legal authority we can have to prevent evictions,” he said.

When asked why the president doesn’t just take executive action now to direct the CDC and deal with the court later on, Psaki said, “Well, I think what you should have taken from the statement that was put out right before the briefing, and also Gene joining us in the briefing today, is that the president has not given up the option of legal action.

“He has asked his team to look, to kick the tires — just to keep the analogy going — and look at every authority, every option we have to keep more people in their homes. That is his objective,” the press secretary said.

“At the same time, he’s also focused on the policy options that are at play, whether it’s encouraging states to use funding; to get the funding out; to extend the moratorium by 30 days, 60 days in some states, that can keep people in their homes; and to see what other policy options we have at our disposal. So we are using every tool we can,” she said.

Biden is still looking at his legal options, “but he’s not going to take a step without legal authority to do so,” the press secretary said.

In a statement prior to the press briefing, the White House said Monday, “Today, President Biden is taking further action to prevent Americans from experiencing the heartbreak of eviction. Thanks to State eviction moratoria, almost 33% of the country will be spared evictions for the rest of this month. But in the remaining States, action is needed.”

“CDC Director Rochelle Walensky and her team have been unable to find legal authority for a new, targeted eviction moratorium,” the White House said.

One potential solution is that Biden is requesting that “state and local governments extend or pass eviction moratoriums to cover the next two months,” Sperling said.

“Right now, one out of three renters who are behind in the rent are actually protected beyond the federal eviction moratorium by extended state and local evictions moratoriums. The president is asking that all governors and mayors follow suit and extend moratoriums for up to — for not ‘up to,’ but for two months,” he said.

“Two, this president is asking that his departments that provide mortgage-backed lending extend whatever eviction moratoriums they have the power to extend. So that covers USDA and VA and HUD,” Sperling said.

“Third, we have already announced that those with federally backed mortgages may not evict without 30 days of notice, but today, the president is going further in his statement Friday and in — by the Cabinet members,” the senior advisor to the president said.

“And in his instruction today, he is asking that USDA, VA, and HUD, and the Treasury Department as well make clear that those who benefit from government-backed mortgages or even tax relief related to housing should not seek evictions without first seeking the Emergency Rental Assistance funding that allows — that makes landlords completely whole; that can pay up to 18 months of forward and back rent and utilities — that we want anybody who’s got a government-backed mortgage to seek that type of relief,” he said.

“Finally, as the congressional leadership discussed and asked, we are going to do an all-agency review to make sure that we understand any potential reason why state and local governments are not getting funds out and making sure that we are using all authorities — whatever federal authority that we have — to prevent evictions,” Sperling said.

He seemed to blame the Trump administration for putting into place “high documentation guidelines” for renters seeking financial assistance.

“On the state and local relief, as you know, there was $25 billion in initial Emergency Rental Assistance. Again, this is the rental assistance that goes — can make landlords completely whole and also keep families safely housed. It is a win-win solution,” Sperling said.

“Unfortunately, on January 19th, the Trump administration left by putting in place a completely unworkable, high-documented — high documentation guidelines that would have never worked. So, immediately, Treasury cleared up those guidelines and got the remaining funds out,” he said.

Sperling said that the administration also “put forward significant guidance” on May 7 and June 24 “that made it clear that you can have simplified applications. You do not have to have documentation for income or non-traditional income or to show your hardship.”

“The president is clear: If some states and localities can get this out efficiently and effectively, there’s no reason every state and locality can’t. There is simply no excuse, no place to hide for any state or locality that is failing to accelerate their Emergency Rental Assistance Fund,” he said.

“So the president is asking today that, at the state and local court level, that they heed the call of the Department of Justice to pause evictions, to ensure that evictions are a last resort, not a first resort,” Sperling said.

He said the administration is “investigating all reasons for any delay of state and local funds, and whether we have the power to compel more expeditious use.”

Biden is also “calling on utilities and landlords to use the funds that Congress has made available to them — the emergency eviction funds, but also other funds in water and heating that they can use before they move to evict.”