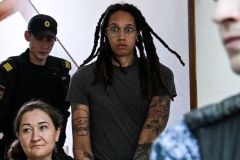 WNBA basketball superstar Brittney Griner arrives to a hearing at the Khimki Court, outside Moscow on June 27, 2022. (Photo by KIRILL KUDRYAVTSEV/AFP via Getty Images)

(CNSNews.com) – WNBA star Britney Griner, who has been in a Russian jail since February after being arrested for having cannabis oil in her luggage, wrote to President Biden this week urging him not to forget about her, and the White House says he hasn’t.

"I'm terrified I might be here forever," Griner wrote in a letter that was delivered to the White House on Monday. "On the 4th of July, our family normally honors the service of those who fought for our freedom, including my father who is a Vietnam War Veteran. It hurts thinking about how I usually celebrate this day because freedom means something completely different to me this year."

White House Press Secretary Karine Jean-Pierre said Tuesday that Biden read Griner’s letter and it’s “an issue that is a priority for this president.”

The White House said Griner is being wrongfully detained, and that National Security Advisor Jake Sullivan spoke with her on Saturday, the second time in the past 10 days that they have spoken. Secretary of State Antony Blinken also spoke to her as well recently, Jean-Pierre said.

“So, I can say that the president did read the letter. I was there when he read the letter. This is something — Brittney Griner being held in Moscow, we believe the Federation is wrongfully — she’s being wrongfully detained in Moscow at this time. This is an issue that is a priority for this president,” the press secretary said.

“As you have heard us say before, he believes that any U.S. national that is held abroad or detained or held hostage abroad, we need to bring back safely, and we are going to use every tool that we possibly can to make that happen. Again, this is a priority for the president,” she said.

“I do want to share that, on Saturday, Mrs. Griner spoke with National Security Advisor Jake Sullivan. That is their second call in the past about 10 days that they have spoken. Secretary Blinken also spoke with Mrs. Griner as well recently,” Jean-Pierre said.

“I don’t have anything else to read out as far as a potential call or a meeting with her family, but clearly, we believe she was wrongfully detained. We believe she needs to come home. She should be home, as well as Paul Whelan, as well - who’s being held - and any other U.S. national who is wrong- — being wrongfully detained abroad,” the press secretary said.

WNBA coach Vanessa Nygaard said Tuesday that if Griner were LeBron James, she’d be home by now. She called into question whether the WNBA star is still in a Russian prison because she’s a black lesbian woman.

When asked about Nygaard’s accusation, Jean-Pierre, who is herself a black lesbian woman, said that Biden has fought for black people, women, and the LGBT community “throughout his career.”

“This is a president who has put all of the things that you just laid out — the LGBTQ community, women, people of color — he has fought for those communities throughout his career, and you — you have seen that in policies that he has put forward,” the press secretary said.

“Again, this is a priority for this president. He’s doing everything that he can. The White House is closely coordinating as well with the Special Presidential Envoy for Hostage Affairs, who has met with Brittney’s family, her teammates, and her — her support network. So we’re going to continue to have those conversations, and we’re going to make sure that she — she and others get home safely,” Jean-Pierre said.

“Look, this has been on top of mind for the president. Like, I was there when he read the letter, and he takes this to heart. He takes this job very seriously, especially when it comes to bringing home U.S. nationals who are wrongfully detained, and you saw the work that his administration did to bring — to bring home Trevor Reed,” the press secretary said.

“That is the same — the same work, the same focus that we did and put behind bringing Trevor Reed home, we’re going to do the same with Brittney Griner and others. So, again, this is a priority. We’re going to make this happen. We’ve had — she’s — we have been in constant communications — Secretary Blinken; the Special Envoy, as I just listed out; and also Jake Sullivan, our National Security Advisor,” Jean-Pierre said.